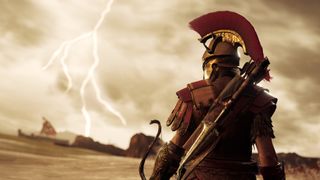 A new Assassin's Creed could be one of the first major releases on PlayStation 5 and Xbox Series X, according to a new rumor.

We already knew that Ubisoft is planning on releasing five AAA games between April 2020 and March 2021, with all of these new titles boasting next-gen support. So far, Ubisoft has officially divulged three of these games: Gods and Monsters, Watch Dogs: Legion and Rainbow Six Quarantine. However, the other two games have remained a mystery.

But we may finally know what they could be, thanks to Kotaku's Jason Schreier, who claims that the two mystery games will be a new Assassin's Creed and a new Far Cry. Check out his tweet below:

Anyone holding out hope for Splinter Cell is, once again, going to be disappointed. Sorry! (It’s AC and Far Cry.) https://t.co/7hKDV3y5QSFebruary 6, 2020

While it's also worth treating rumors with skepticism, Schreier is very reliable when it comes to industry news.

It was almost guaranteed that Ubisoft would release new instalments for two of its biggest franchises on next-gen consoles. And it's not actually that surprising that it could be so early in the consoles' lifecycles considering it's been two years since the release of Assassin's Creed Odyssey and Far Cry 5 - making it primetime for new additions to both series.

We know that Ubisoft's five AAA games (likely including Far Cry and Assassin's Creed) will release between April 2020 and March 2021, with all games boasting next-gen support. That means some, if not all, of these games will be cross-generation titles - working with current consoles as well as the upcoming ones.

It's unlikely they'll all release at the end of this year, to coincide with the console launch – Far Cry and Assassin's Creed games usually launch months apart (with the exception of 2012's Far Cry 3 and Assassin's Creed 3), which makes sense given that they're both time-intensive open world series from the same publisher.

Either way, they're likely to be among the first major games on PS5 and Xbox Series X.