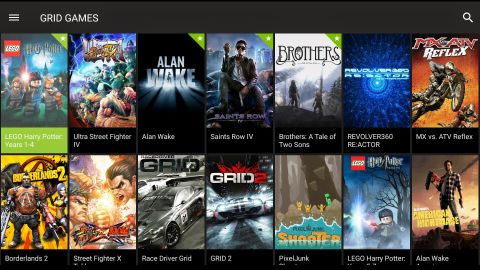 For Nvidia Shield owners, Grid is the cherry on top of a cake - even if that cake is slightly under-baked. For everyone else, it's the project to keep your eye on in 2015.

In theory, Grid - Nvidia's online game streaming service in the same vein as PlayStation Now - is a wonderfully benevolent service made exclusively for Nvidia hardware owners. It's like the yacht club of gaming.

While Sony is grabbing subscribers' cold, hard cash hand-over-fist, Nvidia is offering 40 PC-quality games for free until June 2015 and also has a few dozen games available for purchase through the Grid store.

I saw the service for the first time during autumn 2014 and had a lot of positive comments. Now, several months later, the service has grown in line with Nvidia's predictions by doubling the amount of games available and the general stability of the stream.

In practice, the final product isn't perfect - it turns out a dropped connection can really kill your gaming experience. But in the time since launch Grid has taken a step in the right direction for gamers ready to frag physical media.

Before I dig in with comparisons of how Grid performs under real-world conditions, let's go over what Grid is, how it works and what you'll need to try it out for yourself.

Grid, like PlayStation Now, is a cloud game-streaming service that streams PC versions of games from a remote service to your handheld device. Grid is currently available on two platforms, the Nvidia Shield Tablet and Nvidia Shield Portable, and can be found in the "Grid Games" section of the Shield Hub app. Announced at GDC 2015, Grid is also coming to the Nvidia Shield, a 4K Android TV set-top box that packs some serious plastic.

Using remote, proprietary servers, Nvidia performs the graphics-heavy processing needed to play AAA titles and then streams the results to your device. It's constantly sending packets of information, and takes input from your controller and sends it back to the server.

As you can imagine, you'll need a pretty fast Wi-Fi connection to make this all happen. Nvidia recommends connection speeds of at least 15Mbps for 720p, 30 frames per second (fps) gameplay, though it says you could scrape by with 5Mbps if push came to shove.

However, hardwiring your Shield Tablet to a router will step you up to the coveted 1080p, 60 fps stream. (Though, I can't see most sensible players even bothering with this solution.) Nvidia recommends a 50Mbps connection speed for wired play, but claims users should be able to get by with 15Mbps. Nvidia also recommends using a "game stream-ready" router, though does not require one to use the service.

Here at TechRadar HQ, we enjoy speeds of around 30Mbps down, and my home network could muster around 25Mbps down and 7Mbps up. Keep in mind that neither of these two connections were through game stream-ready routers, which is important to note for the performance section coming later in my impressions.

Lastly, before I continue, the service is limited for the time being to the US. There are plans in place to roll it out globally over the next few months, starting with the rest of North America and Western Europe and ending with Asia Pacific.

When the service launched in November 2014, there were roughly 20 games available for free. Fast-forward three months and the service has doubled to offer 40 games with even more available to purchase and stream remotely. Best of all, Nvidia has no plans of stopping. I was told to expect "a PlayStation Now-sized library of over 100 games by this time next year."

Nvidia has clearly leveraged its relationships with publishers to get AAA games on Grid from the very beginning. Yes, the point can be made that a few too many of the games available have been around since 2010, but it's impressive that the service is launching with many of the games we're still waiting for on PlayStation Now.

What's going to push the platform moving forward the most, however, are consistent updates that bring more recent and popular games to the Hub page. This is especially so for the Nvidia Shield coming in May.

Next Page Pricing and stream quality