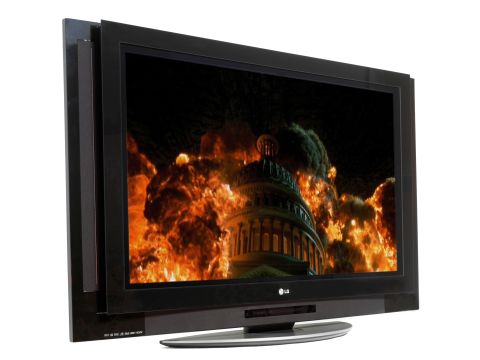 LG is now out for high-end glory with this 50-inch plasma TV, with its glossy black finish and subtle design touches, like the neat LCD readout. The 50PY2R's connections seem to continue the flagship theme, including as they do component and HDMI inputs for hi-def duties, plus three Scarts, an analogue PC input, and slots for up to eight multimedia card formats usable for direct playback of card-stored JPEG or MP3 files.

The only important connection we couldn't see was a CAM slot for adding TopUp TV to a built-in digital tuner. But there's a good reason for this: the 50PY2R doesn't have a digital tuner! This seems peculiar on a flagship TV, especially as lesser LG models do.

Fed a high level source, it performs well too. Particularly striking with our Independence Day DVD is its phenomenal black level response. This helps the night skies around the destruction of the Empire State Building seem unusually deep and intense. But such dark areas also possess enough shadow detailing to avoid flat TV's common hollowness.

Its other HD-specific strengths include impressive fine detailing (as seen in the distance shots of New York's buildings and traffic), strikingly natural colours, contoured edges free of jaggedness or haloing and little sign of plasma's colour banding or motion fizzing artefacts. All sources on this TV, meanwhile, also look decently free of noise, be it grain, dot crawl or moiring.

A number of things go wrong while watching standard definition sources, however. The picture becomes less sharp, for starters, as evidenced by faces having a slightly soft, textureless look. Particularly vibrant shots, like those of the red crop duster, look a touch short of colour intensity, too.

The 50PY2R gets spectacularly back on track with its sound, though. Sensibly calibrated, the subwoofer provides bass galore for moments like that immense rumble as the first alien ship passes over the moon at the start of Independence Day. But the bass never overwhelms mid-range vocals or treble effects. The soundstage opens up well for action set-pieces, too.

If you're after a purely hi-def machine, LG's 50PY2R is a great looking, great performer. Only the extent of its quality reduction with standard definition and the price tag give pause for thought.