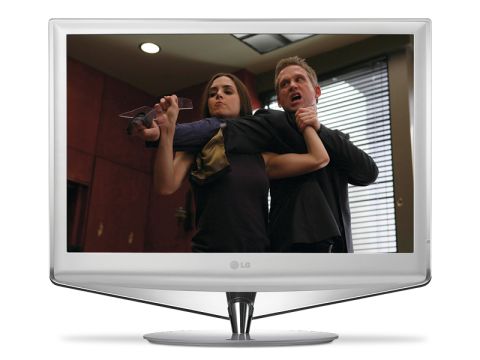 LG's usual attention to design and quality is evident

Pretty-boy looks and excellent pictures make this a definite temptation, despite its wimpy sound

Thankfully the 22LU4000's beauty is more than just skin deep. Its roster of connections includes two Scarts, two HDMIs, and a PC input. In an ideal world, the provided USB port would play JPEGs and MP3s rather than just being for 'service' use, but when is the world ever ideal?

Yet more good news finds the TV providing far more picture tweaks than most people will ever need.

Examples of the less common stuff include a gamma adjustment, a black level booster, a dynamic colour processor, and even the facility to shift to a Wide Colour Gamut if the standard colour setting isn't bold enough for you.

Despite having so many features, though, the 22LU4000 remains a doddle to use thanks to some attractive and clear onscreen menus, plus an unusual Picture Wizard system that helps you calibrate your image settings via a series of test signals.

Immediately impressing us is the image's clarity, in terms both of the detail reproduced with HD sources, and the lack of motion blur.

The 22LU4000's black level response is in a different league to that of most small televisions, too, delivering dark scenes with a sense of genuine depth and naturalism.

The lack of unwanted greyness in the picture also helps the television produce decently vibrant colours, given added appeal by some subtle blends and natural tones.

Or at least, that's the case with high-definition material. When it comes to standard-definition content, colours start to look less natural and a touch softer than we'd ideally like, but then that's a common failing of Freeview.

Even at their worst, though, the 22LU4000's pictures are never less than watchable. And when they're at their best, this set is undoubtedly one of the best small screen picture performers around.

It's a pity, then, that its sound is so flimsy. The underpowered speakers, hidden away somewhere in the cutesy bodywork, struggle to make The Jeremy Kyle Show sound convincing, never mind a decent action movie soundtrack.