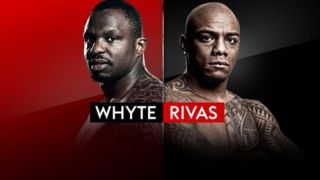 There's loads on the line tonight at the O2 in London as Britain's Dillian Whyte takes on Colombia's Oscar Rivas. Both the WBC interim heavyweight title and a future crack at champion Deontay Wilder as mandatory challenger are the spoils for the victor in what looks set to be an explosive showdown. You can live stream the Whyte vs Rivas fight and its undercard using our guide below.

Dillian Whyte vs Oscar Rivas - where and when

Whyte vs Rivas will take place today (Saturday, July 20) at the O2 Arena in London.

Whyte has had a frustrating wait to get his dream title fight, having been ranked as the top contender by the WBC since November 2017. A win tonight will earn him the big money bout he's been craving for so long. Whyte comes into tonight's tear up with nine straight wins under his belt - the most recent coming against his fellow Brit rival Dereck Chisora in December.

He certainly hasn't taken the easy option with his opponent tonight - Oscar 'Kaboom' Rivas, a 32-year-old Colombian who usually fights out of Canada, has an impeccable 26-0 (18 KOs) professional record. His past conquests include Andy Ruiz Jr, the recent shock victor over Anthony Joshua.

There's a pretty strong undercard to get things nicely warmed up as well, with veteran Brit heavyweight Dereck Chisora taking on the equally unpredictable Artur Szpilka from Poland.

Read on to find out how to live stream Whyte vs Rivas boxing from absolutely anywhere.

Live stream Whyte vs Rivas from outside your country

In the US, Canada (where DAZN has you sorted) or UK tonight? Then scroll just a little further down this page and we'll tell you who's broadcasting the boxing from where you are.

Short for Virtual Private Networking, it's an ideal piece of software that allows you to change your IP address so you appear to be in a completely different location.

They're are also really handy if you're concerned about streaming safely on the web, thanks to the encryption they use to hide your details. And the best won't log your personal information, either. We've tested hundreds of VPNs and can recommend these as the best VPN services currently available:

1. Express VPN (comes with a 30 day money back guarantee)
This is the #1 rated best VPN in the world right now. You can watch on many devices at once including Smart TVs, Fire TV Stick, PC, Mac, iPhone, Android phone, iPads, tablets etc. Check out Express VPN and get 49% off and 3 months FREE with an annual plan.

2. NordVPN: one of the most affordable VPNs out of the big guns and no less impressive for it.

3. IPVanish supports up to 10 devices, so great on the go and super secure.

How to watch the Whyte vs Rivas fight: UK stream

British fight fans looking to watch tonight's fight will need to go down the pay-per-view route, with Sky Box Office holding exclusive broadcast rights to the main event and its undercard.

It's priced at £19.95 to purchase. With that you'll get reruns of the fight as well, so you can even watch it again – if it's as good as it's looking it will be. The undercard action is set to begin at 6pm with the main event due to commence around 10.30pm.

Sky's streaming platform - Now TV - is also showing the fight for the same price. So if you don't already have Sky and just want this one off event then this is your option.

How to watch Whyte vs Rivas: US live stream

Streaming service DAZN continues to lap up must-watch event, including all tonight's action from the O2 in London.

For current subscribers, the fight is already included as part of your plan.

Tonight's undercard is set to begin at midday PT and 1pm ET, with the main event slated for a 2.30pm PT, 5.30pm ET start.

As with the US, DAZN is the channel holding the cards for Whyte vs Rivas in Canada, too. But unlike South of the border, Canadians are also offered the one month free trial. Subscriptions are $20 per month or $150 annually at present.

How to watch the fight in Australia

It doesn't currently look like the Whyte vs Rivas fight will be broadcast live in Australia. The only way we can think to watch (without accessing some kind of dodgy, insecure Reddit stream) is to get yourself a VPN so you can access coverage from another country.