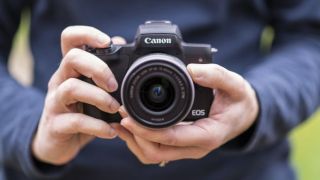 Canon has been busy this year, what with the launch of the EOS 90D and EOS M6 Mark II. And going by the latest rumors, 2020 will be even busier for the Japanese camera maker.

We already know that the pro-sports EOS 1D X Mark III DSLR will be announced early next year, but Canon Rumors is reporting that two more crop sensor mirrorless cameras will be added to the company's growing line-up in 2020.

One of them is rumored to be a 24MP APS-C snapper that will come with eye-detect autofocus and Canon's tried-and-tested superb Dual Pixel CMOS autofocus technology (which increases AF speed and accuracy in live view mode) available on a 3-inch vari-angle rear touchscreen.

Canon Rumors goes even further to put a price tag of $849 for a kit with a lens for this rumored EOS M camera, which will reportedly be announced in "before July 2020".

The EOS M50 was the first Canon camera to debut the Digic 8 processor, giving this entry-level mirrorless snapper plenty of power. No wonder it soon became one of our favorite affordable mirrorless cameras.

Although it was launched only in 2018, Canon Rumors reports that the second EOS M camera to launch in 2020 will likely be a refresh of the M50. With the EOS M6 Mark II already boasting a 32.5MP APS-C CMOS sensor, we wouldn't be surprised to see the same make its way into the EOS M50 Mark II.

While Canon Rumors lists the Digic 8 imaging engine as accompanying the higher resolution sensor, we'd love to see the Digic 9 (which could be debuted in the EOS 1D X Mark III) make its way to the newer version of the M50, giving the rumored CSC (compact system camera) a massive boost in performance.

If the other rumored specs of the M50 Mark II have any element of truth to them, then we're likely going to see the upcoming camera capable of 4K video recording at both 24fps and 30fps, with Full HD (1080p)  capture at up to 120fps. The rear touchscreen will reportedly be a 3-inch vari-angle panel with 1,040K-dot resolution.

If a refresh of the EOS M50 is truly in the cards, Canon Rumors says it will be announced some time in September 2020. So don't get too excited just yet, as these are still rumors and things can change between now and then.