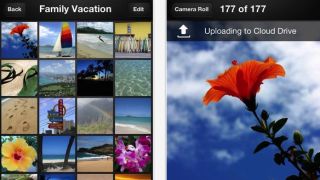 Apple then iOS, iOS then Android. There can often be a one-followed-by-the-other roll out to apps between the two major OSes (we won't mention Windows Phone 8 or others in this case), and Amazon followed form this week as it launched Cloud Drive Photos app for iOS.

This follows the app's November 2012 release on Android, and now gives iDevice users their option to store their snapshots somewhere other than their phone. Users will get 5GB of storage for free, with extra space starting at $10/year (around UK£6, AU$9.99) for 20GB.

Pics taken with an iPhone or iPod touch are saved to Cloud Drive automatically when the app is running, and photos are accessible from either device, computer or any web browser, noted PC Mag. One note for expectant users: Users must have iOS 6 or higher to use the app.

Android, iOS, Windows Phone 8, Symbian. It doesn't matter what OS you use; our news blips are for everyone.