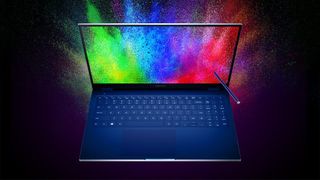 Samsung's phones might get most of the attention, but the company has its share of laptops as well. And, with the introduction of the new Galaxy Book Flex and Galaxy Book Ion lines, it's delivering even more in the way of Ultrabooks.

The Galaxy Book Flex is a 2-in-1 with a built-in S Pen, while the Ion is a more traditional laptop, incorporating the now-trendy, raised-hinge design to create more airflow below the computer and a better typing angle.

Both laptop lines come in a 13.3- and 15.6-inch variant, and all of them feature Full HD displays. But, they're not the typical LED panels found on laptops. Instead, Samsung is bringing over its QLED display technology, making these the first laptops to feature the premium screens.  The displays also feature an Outdoor Mode, which offers a maximum brightness of 600 nits.

All the specs of an ultrabook

As part of Intel's Project Athena, the new Galaxy Book Flex and Galaxy Book Ion have the high-end features you'd expect from an Ultrabook. They all offer Thunderbolt 3 connections and Wi-Fi 6. They also offer Qi wireless charging through the trackpad, though it doesn't sound like the most practical feature.

Beyond those features, the laptops are otherwise more straightforward. The Flex models offer the efficient performance of Intel's 10nm Ice Lake processors, while the Ion models go with the beefy Comet Lake processors. They'll also come with up to 16GB of RAM and 1TB of NVMe SSD storage, with the 15-inch Galaxy Book Ion coming with an extra memory and extra storage slot for further expansion.

The 13-inch models of both lines come with Intel integrated graphics options, while the 15-inch models have the option of NVidia GeForce MX250 graphics.

Both lines will be available in the US in early 2020, perhaps to coincide with a Galaxy S11 launch. We don't have details on pricing or global release yet.