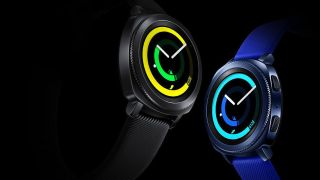 Samsung introduced two new products in their wearables category back in October during IFA 2017. The Gear Sport smartwatch and Gear Fit2 Pro fitness tracker have now made it to India on Wednesday. Both the wearables have been announced and are up for pre-orders starting December 4 followed by general availability from December 11.

Both the Gear products feature water resistance of up to 50 meters backed by a MIL-STD-810G certified military grade build. The smartwatch and fitness tracker comes with a range of fitness features that are targeted for basic as well as advanced users. Features such as inbuilt GPS, run and swim tracking along with a 24-hour activity tracking setup gives these two, an edge in the wearable space. Samsung has also tied up with Speedo for their swimming training app which will allow users to monitor their strokes, laps, time among other things.

Along with this, the Gear Sport and Gear Fit2 Pro feature real-time heart rate monitoring, automatic activity detection that detects motions like walking, running, cycling along with other such dynamic activities.

The Gear Sport comes with a 1.2-inch AMOLED display with a layer of Gorilla Glass 3 and feels a lot like the Gear S3 Frontier which was launched earlier this year. It features a rotating bezel which helps users interact with its UI just by rotating it and selecting an option via tap. The Gear Sport also has an Always On display feature which will show a watchface of user’s choice throughout the day. It comes with an internal storage of 4GB and runs on Tizen based OS. The 300mAh battery onboard will last for 2-3 days with moderate use of GPS, claims Samsung. Users will be able to charge the smartwatch with a wireless charger provided in-the-box. The Gear Sport smartwatch will be available in Blue and Black colour variants.

Unlike the Gear Sport, the Gear Fit2 Pro is a fitness tracker by Samsung. It features a 1.5-inch Super AMOLED display that has been curved to fit on the wrist. It feels as part of your wrist on wearing it because of this curved display. Users can interact with the watch via touch input and view fitness features like steps, swim, cycling, exercise tracking and changing watchfaces. Gear Fit2 Pro also doubles up as a display for showing map directions, activities and replying to text messages. The Gear Fit2 Pro comes in Black and Red colour variants.

The Gear Sport smartwatch is priced at Rs 22,990 while the Gear Fit2 Pro will retail for Rs 13,590. Pre-orders for both the smartwatches begin from December 4 followed by general availability from December 11 on Flipkart, Amazon and Samsung India e-store.