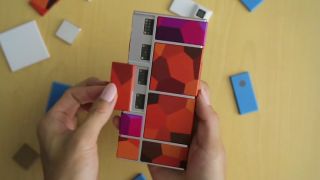 Around 50 of its modular components are also expected to be displayed, though it's rumoured that not all of them will be in working condition. The main Project Ara handset should be a complete working version, however.

Project Ara's modules will allow owners to easily swap out and upgrade various parts of their phone, such as the camera, RAM and graphics capabilities, and although we don't know how much the modules will sell for, Toshiba's Senior Vice President and Chief Technology Officer Shardul Kazi has indicated that the company's modules will range in price from $50 (around £32, AU$65} to $500 (£325, AU$650).

Toshiba has recently announced that it will be partnering with Einfochips to produce chips for Project Ara handsets, and it has already designed two different versions of the phone, the Spiral One and the Spiral Two.

The Spiral Three is also expected to be announced, so we may see some Toshiba-branded modules along with Project Ara at MWC 2015.