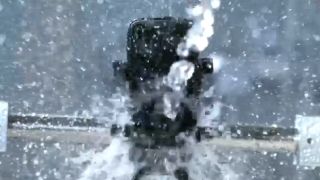 Not the hose, nooooooo!

Samsung has released a video showing how it tests phones like the Samsung Galaxy S3 for durability – and any smartphone fans of a sensitive disposition may want to avert their eyes.

The video reveals some of Samsung's own gadgets, like the special machine for mashing the menu button 200,000 times at various weights and a tumble dryer full of some kind of sharp corn type things that scratch the handsets up both on show.

Our favourite has to be the creepy disembodied posterior, sensitively clad in the seat of a pair of blue jeans as it sits on a Samsung Galaxy Note 2 – you know, to protect everyone's dignity.

It's all in the jeans

We defy anyone not to wince when the microUSB connector is ever-so-slightly bent out of shape by another of Samsung's torture implements.

That's the point at which we were fighting the urge to tell Samsung everything we know about Apple's secret plans (nothing), just please please stop bending that connector.

It's always sobering to remember the sacrifices that some phone make for the rest of us.

The video is entirely in Korean but the visuals are pretty self explanatory - we advise you to watch it with the lights on.