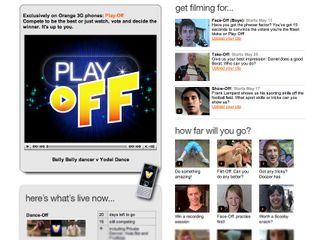 Fame-seeking mobile users can now grab the chance to be a star of the very small screen with Orange's Play-Off mobile video talent show. The new Play-Off service introduces reality TV-style performance and voting on 10-15 second video clips sent in by users by MMS from their mobile phones.

Orange's Play-Off gives users the chance to create and submit short videos by MMS for a series of challenges under a range of categories - initially Face-off, Dance-off and Weird-off. The best clips then go into a series of play-off rounds, judged by other users. People can vote for their favourites in true X Factor style, with the winners going on and the losers dropping out.

"It's all about fun and spontaneity" said Deborah Tonroe, Head of TV and Video at Orange. "We're expecting 1000's of viewers to watch and vote on the first competitions - so it's perfect for anyone who fancies 15 seconds of fame!"