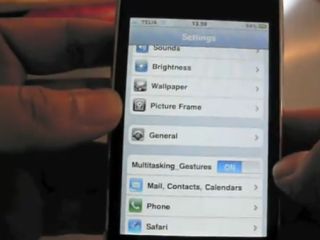 Try not to get too jealous

Apple has granted developers an extra little treat in the iOS 4.3 betas – a preview of multi-touch gestures.

With the release of the second iOS 4.3 beta to developers yesterday, Apple said that the multi-touch gesture input won't be coming to customers when iOS 4.3 is shipped, rather it is "providing this preview to gather input on how these gestures work with your apps".

Still, it's a pretty safe bet that we'll see the gestural input method make its way to our iOS screens at some point in the future (on the button-less generation, perhaps?).

Antoni Nygaard has helpfully recorded a video showing off how the gestures work for multitasking.

While four-fingered swipes to scroll through applications instead of having to bring up the dock are kind of cool, the do look a little clumsy on the iPhone 3GS' small-ish screen.

Nygaard also demos how you can toggle the mute switch to become a screen orientation lock button towards the end of the video; less exciting than multitouch gestures, perhaps, but more likely to make its way to an iPhone near you soon.