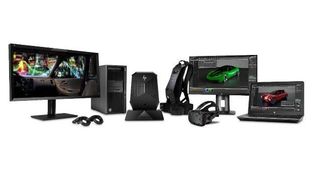 Virtual reality has a lot of practical applications. In an attempt to address a few of them, HP launched its first business focused wearable virtual reality (VR) personal computer (PC).

Launched as the ‘world’s first professional wearable VR PC’, the HP Z VR Backpack is a first of its kind and asserts that it can bring the ‘full potential’ of VR to life. Aiming at the commercial segment, the backpack can be applied to product design, architecture, entertainment and automotive tasks.

For the consumer, HP says that the Z VR backpack has the potential to reinvent the buying experience. On the other side, HP’s proposition for businesses is that the Z VR Backpack can be used to reduce the cost of training exercises as well as the risk associated with dangerous situations.

It isn’t too heavy at 4.6kgs. The company also claims that since the harness of the Z VR Backpack is made from mesh, it should be durable as well as comfortable over long usage.

Its docking solution gives users the option to move between using a desktop and using the wearable VR PC as per their requirements. It even has support for two 4K displays.

The PC comes with numerous ports that cover most of the bases. It has 4 USB 3.0 Type-A ports, USB Type-C port, HDMI 2.0 port, a mini-DP 1.3 port, audio combo jack, an HMD power jack and the power port.

According to HP, between the two batteries, the backpack should be good for an hour of high-performance VR. PC operation is dependent on the internal battery.

The HP VR portfolio also includes the HP ZBook 17 which runs on the 7th gen Intel Core i7 processor and NVIDIA Quadro P5000 with up to 64GB DDR4-2400 ECC and up to 1TB HP Z Turbo Drive PCIe SSD. It’s basically a 17-inch laptop with an Ultra HD DreamColor IPS screen.

If you don’t want the portability of a laptop, then there is the option of 1HP Z Desktop Workstations. The Hp EliteDesk 800 G3 Tower, specifically, is a VR certified PC.

The company’s redesigned the desktop to fit a 26% smaller chassis and paired it 7th gen i5 and i7 Intel Core processors, to keep with the times at the modern workplace.

This is most reasonable of all three offerings, price wise, at Rs 72,000.

HP's wearable VR PC portfolio was launched internationally in 2017 but the products have only come to India now. The the Omen X Compact Desktop hasn't yet entered the Indian market, but with the launch of these products, perhaps it will make an appearance at the next launch.