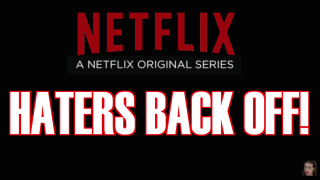 The streaming service announced that it's signed on Colleen Ballinger-Evans, better known as her YouTube alter ego Miranda Sings, for an eight-episode run called Haters Back Off.

The series is expected to follow the family life of Miranda Sings, who fancies herself a singer who should be famous, despite having no real talent, though she'd never admit to that.

Her YouTube channel, which has 5.7 million followers, is filled with hilariously horrible covers of popular songs. She also tours.

Haters Back Off has been developed by Ballinger-Evans, her brother Chris Ballinger, along with writing team Perry Rein and Gigi McCreery, known for their work on Friends, Wizards of Waverly Place Becker and See Dad Run, according to EW.

Netflix hasn't announced when the series will air, but you can check out Miranda Sings announce the show in the video below.

To give you an idea of what to expect from the new series, Miranda says she's doing a bit of charity work in helping out Netflix.