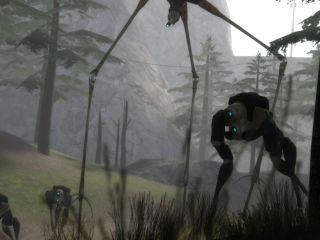 Is Half Life 2 on par with Shakespeare in terms of literary worth?

Bioshock, Half Life 2, Assassin's Creed, Deus Ex, System Shock, Ico, Shadow of the Colossus – all beautifully realised, cleverly told, story-based games – have done that odd thing that few games to date have achieved. They moved us.

In very much the same way that reading a great piece of literature does.

Does this mean that games have the potential of telling stories in the same ways as the canonical works of literature? Nottingham Trent University researcher Dr Souvik Mukherjee certainly thinks so, having recently completed a PhD on that very subject.

"These days we're used to grandiose claims being made about the cultural and educational worth of videogames," the Guardian's Keith Stuart.

"We know all about hand-eye coordination and organisational skills. We know games improve eyesight. But what we possibly didn't know is that videogame narratives should be considered as complex and multilayered as those of our most revered litertary works."

Dr. Mukherjee "explored how the complex mesh of possible storylines and deep levels of involvement in video game narratives relate to, and often surpass, the experience of earlier narrative media, such as books and films," according to a press release issued by Nottingham Trent Uni.

Mukherjee claims that "games can be read and books can be played" dropping in the example of John Fowles, The French Lieutenant's Woman, as a book that "offers multiple endings and therefore prefigures the format of videogames."

There are two schools of videogame theory - ludologists (that focus on play) and the narratologists (that focus on story-telling within the game), but whether or not our offspring will ever be studying Gears of War in twenty years time as "a classic example of a male ego-driven fantasy narrative" is still under question...