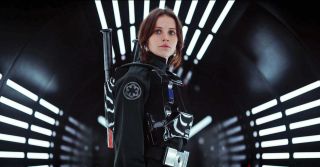 Rogue One: A Star Wars story, the first in Disney’s ongoing series of standalone Star Wars movies, will have feature effects that “[no-one] will have seen before”, as director Gareth Edwards “threw out the rulebook” during filming.

That’s according to Oscar-winning creature and special make-up effects supervisor Neal Scanlan, speaking at an event at Pinewood Studios to mark the start of a partnership between grooming brand Gillette and the Star Wars franchise.

Scanlan, who has worked on films including Star Wars: The Force Awakens, the as-yet-untitled Star Wars: Episode VIII, Alien-prequel Prometheus, and of course Rogue One: A Star Wars Story, stated that Rogue One will very much be a reflection of Edwards’ “young and dynamic” personality.

“Every film is about [a director’s] personality as much as anything else,” said Scanlan.

“I think with Force Awakens you can see it is very much JJ Abrams’ film, and you’ll see the same with Gareth Edwards and Rogue One.

“What’s amazing and exciting about Rogue is that you can see with Gareth Edwards, who is in a sense a young and dynamic guy that took on this huge responsibility, that what he’s done is incredibly brave.”

Despite that responsibility (and the unsettling shadow of rumors concerning significant reshoots) it seems Edwards has stood by his “unique” vision for the first Star Wars spin-off movie.

“He threw the rulebook out the window and came from it from his own unique standpoint,” said Scanlan.

“It’s respectful of the genre, but he’s been brave enough to put his own twist on it. There’s quite a unique and exciting feel to this film, which we maybe haven’t seen before.”

One such element is a new droid, who, at least measured by Scanlan’s enthusiasm, looks set to be every bit as memorable as R2-D2 or C-3PO.

“One of the characters is very much from Gareth’s mind,” notes Scanlan.

“There’s a new droid in there [K-2S0, voiced by Firefly’s Alan Tudyk] which I think is going to be what they call a ‘breakout’ character.”

'An enormous amount of detail'

Scanlan has a strong track-record when it comes to droid building too - he was integral in bringing to life the football-like BB-8, from a mere sketch on a napkin offered by J J Abrams ahead of The Force Awakens’ production.

“Bringing BB-8 to life was a lot of fun,” reminisced Scanlan.

“Sometimes we do things, and we’re very close to them ourselves, and it is what it is. But BB-8, right from the start, you kind of know that he (or she) was going to be something special. How do you replace R2-D2? I think BB-8 took on that mantle.”

For those that like to pour over every scene of a Star Wars film, Scanlan promises that Rogue One will offer plenty of detail to fuel repeat viewings.

“As with the rest of the Star Wars films, Rogue One has an enormous amount of detail that flashes by you at a frightening rate,” said Scanlan.

“There is this language, there is this charm that you want to hold onto,” said Scanlan of the differing effect types.

“Sometimes it's simply better for the actors to have something practical there, because they will respond in a way that’s different to just having a blue stage to draw their eyes. Other times, it’s distracting to try to do it practically, perhaps due to the infrastructure around it. There are so many different things that play into the decision. Which will be the most successful, not only for the film, but for the filmmaking process.”

And, for the rising generation of young filmmakers, practical effects may feel as alien as the regulars at the Mos Eisley Cantina.

“As soon as an effect becomes an obstacle to a director's ability to shoot, it no longer has what we’d call that precious quality,” explains Scanlan.

“That’s one of the wonders of CG as a post-production effect, as it never really intrudes in the filmmaking process. You have to be very careful as you start to introduce that and start to push special effects forward, to a generation that aren’t very used to using practical effects either. I’m surprised sometimes that I’m so old! What’s not new to me is new to them and it’s a whole new introduction for them.”

But, as with all previous Star Wars films, Rogue One: A Star Wars Story promises to push the envelope once again towards a galaxy far, far away.

“There’s the beginnings of some really exciting amalgamations of the practical world and the digital world, which I don’t think anyone will have seen before,” promises Scanlan.

Rogue One: A Star Wars Story, hits cinemas on December 14th. It’ll be accompanied by a whole range of Star Wars-themed products from Gillette - as well as the nifty advert below, which was shot using the same props and sets as the movie itself. See if you can spot two new droids, built by Star Wars fans, which will also feature in the final flick - a dream come true for those DIY fanboy builders.