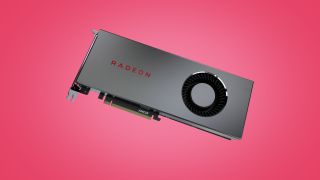 The incoming Big Navi graphics card has apparently arrived with AMD in the US for testing, in what’s (hopefully) another sign that this high-end offering will be released sooner rather than later this year.

We do know for sure that the ‘Nvidia killer’ will arrive at some point in 2020, because AMD’s chief executive Lisa Su has already told us that in no uncertain terms.

Exactly when it will arrive is another question, although the latest speculation points to a Computex 2020 (June) launch, for what that’s worth (big pinches of salt all round).

At any rate, this new rumor comes from the Chiphell forums (so even more condiments are required), as spotted by Guru3D, and contends that the Navi 21 GPU (Big Navi) will run with 80 CUs (compute units), being built on RDNA2 architecture (in other words, a whole new architecture compared to existing Navi cards).

It’s also thought that RDNA2 will bring hardware acceleration for ray tracing, to keep up with Nvidia’s RTX graphics cards on that front, too.

As mentioned at the outset, the speculation also insists that an engineering sample of the GPU has been sent over to North America for testing to begin.

If this is correct, and AMD is indeed ramping up to 80 CUs (meaning 5,120 stream processors) with Big Navi (which may end up being designated the Radeon RX 5950 XT, at least going by some EEC filings), then that’s double the 40 CUs of the RX 5700 XT.

Yes – twice as many.

So that gives you some idea of the power which this new flagship Navi GPU will bristle with – although note that we can’t judge the performance of an unreleased GPU purely going on compute units, of course. A lot more factors are involved in how the final product plays out in terms of clock speeds, not to mention power consumption and so forth (no one wants a card that runs seriously hot, naturally).

The other question mark is that if AMD is indeed bringing in hardware support for ray tracing, then how does that fit into the GPU puzzle? In other words, will ray tracing performance be a priority and focus, potentially at the expense of traditional rendering (rasterization)?

We simply don’t know, and all these different parts of the equation will have an effect on the overall performance of Big Navi.

Going by rumors – which of course is all we have at the moment – Big Navi could be 30% faster than Nvidia’s GeForce RTX 2080 Ti (if indeed it is the GPU which is the subject of that leaked benchmark, and that’s far from certain).

One thing we do know is that AMD really does need to release something seriously beefy for the high-end, given that Nvidia is expected to push out much faster next-gen Ampere consumer graphics cards at some stage this year.

So the pressure is on AMD to get Big Navi out before this happens, and preferably well before, lest the ‘Nvidia killer’ ends up having to take on the RTX 3080 and company, which will obviously be an entirely different ballgame.