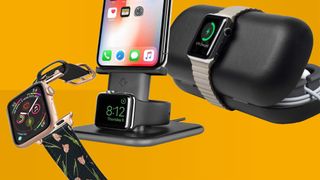 We love our Apple Watches, from the new Apple Watch 5 to older yet still reliable models, along with the ecosystem of extras that’s grown around them. From cases to chargers, bands to stands there’s a whole world of accessories that can supplement your Apple Watch and make it uniquely yours - and you can buy them for cheaper during Black Friday 2019 season.

Some of these accessories can end up saving you a ton of money in the end, too. Had we at TechRadar bought a quality protective case from Spigen for around £8 / $8, we might have avoided a little doorframe knock that cracked the screen of our Series 4. To fix it, Apple wants £286. Just give it a think.

Accessories are a good buy at any time of the year, but they’re a particularly good buy on Black Friday because they tend to get discounted very heavily.

For cheaper items such as cases those discounts aren’t huge, but when you start getting into the world of good quality straps and charging stands the savings soon add up: 50% off a £8 case isn’t going to keep you in caviar and avocados for long, but when it’s 50% off something that usually retails for three figures, things start getting considerably more fun.

One of the easiest ways to completely transform your Apple Watch’s looks is to swap out its watch band - and one of the easiest ways to bankrupt yourself is to do that with Apple’s own bands: we can’t complain about the quality, but they’re not exactly cheap. Thankfully, there are tons of third party Apple Watch straps and bands to choose from, from the fun and occasionally sparkly designs of Casetify to premium leather bands. And every Black Friday, there are tons of really decent deals that can save you a fortune on straps and bargain bands.

For example, last year Best Buy took 25% off selected Apple Watch bands, while Casetify offered tiered discounts: 15% off orders over $35, 25% off orders over $75 and 30% off orders over $100. Southern Straps did a buy-two-get-one-free deal where you’d get a free nylon band if you ordered two other bands. Kolek took 20% off its leather bands on Amazon.

Groupon ran a deal offering $13 Milanese Loops for just $10, although we’re going to stick our neck out here and suggest that a ten-dollar copy of such an intricate product might not be quite as good quality as the official Apple one.

Nightstand mode is nice enough, but there’s something inelegant and decidedly un-Apple about just parking your Watch on its side with the charger cable sticking into the air. We’re expecting deals this year on stands to recharge your smartwatch and make it look regal on your nightstand or desk, too.

More affordable options were discounted too: there was 20% off Spigen’s simple but effective Apple Watch stand, bringing it down to just $11, and the NightStand for Apple Watch dropped from $29.95 to $14.95.

The charger that comes with your Apple Watch is perfectly nice, albeit with a cable that’s far too short. ut sometimes you want something a bit more interesting – especially if you’re going to be travelling for longer than your Apple Watch’s one- to two-day battery life. Just be very, very careful what you’re buying here: repeated investigations have shown that no-name cheap chargers fail basic safety tests and can even be fire risks. This is definitely an area where the price of something can be too good to be true, so check reviews carefully.

Chargers don’t tend to attract a lot of attention on Black Friday, but there are still discounts to be found. Last year Twelve South took a healthy $10 off its TimePorter travel charger, bringing it down to $47 on Amazon.

There are lots of really horrible Apple Watch cases out there, but protection needn’t mean making your Watch look like it fell out of a Christmas cracker or bargain bin. Cases such as Griffin’s Survivor or Spigen’s super-thin bumper cases look good and as we know to our cost, can save you from having to get your Watch expensively repaired after an accidental smack.

Cases are already very competitive, but things got even more competitive on Black Friday last year: various protective cases dropped from around $11 to $5 or $6. Five or six bucks is hardly a fortune, we know, but if you’re buying a bunch of stuff even little discounts soon add up to big savings.

We don’t tend to think of AirPods as an Apple Watch accessory, but of course they are – and with a standard retail price of $159 / £159 any discount is going to make them more attractive.

Last year Newegg took $19 off the sticker price, which was pretty modest but didn’t require you to buy another product or switch your phone provider like other US AirPods deals. Sam’s Club offered a slightly better deal with $30 off AirPods, while in the UK BT and John Lewis discounted AirPods by £20 and £15 respectively.