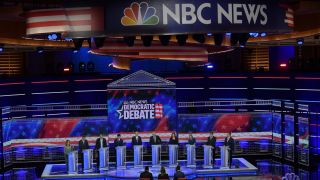 The first Democratic Debate full video recap is here, and so are the video highlights featuring the 20 Presidential candidates on an overcrowded Miami stage.

Just in case you weren't there running for the Democratic nomination (there are just that many candidates this year), we've embedded a series of bite-sized video recaps below after offering the full live stream from NBC News and its partners.

There's over four hours of Democratic Debate video content, and it was broken up into a two night affair – night 2 was when the more exciting sparring happened.

Let's start with a night 2 highlights video, followed by the five more pivotal moments of this first Democratic Debate. Below that is the full video recap.

This is already one of the more popular YouTube video highlights from night 2 of the Democratic debate hosted by NBC (thanks to his YangGang following). It's where he explains the idea of a Universal Basic Income (UBI) that promises $1,000 for every American (young and old, poor and wealthy).

Here's another big highlight video, one that we could see coming long before tonight's debate. It featured Kamala Harris confronting Joe Biden on race relations and his previous stance on busing to schools post-racial segregation. It's a tense, but engrossing exchange.

One of the biggest topics covered during the full live stream video that caught our eye was a hand-raising question: where do candidates stand on providing healthcare for undocumented immigrants? It turns out all of them do, even Joe Biden – despite being mistakenly called out for not raising his hand. The video replay shows he did.

Pete Buttigieg on why he doesn’t support free college, at least not for everyone. In this video highlight, he touches on why the wealthiest of Americans should still have to pay for college. He also talks about his personal student debt, and how he (along with others on tonight's stage) is still paying his student loans.

The first major debate jab against front-runner Joe Biden came from Eric Swalwell, and it regarded Biden's age (76, and he'll be 77 in November). Swalwell used Biden's comments from 1987, when he advocated leaders "pass the torch to a new generation of Americans." Swalwell said those words ring true today.

Below is where you'll find the full stream of night 2 and the full video of night 1, and more video highlights are available on the NBC News YouTube channel.

But first, when is the next Presidential Debate?

Next Presidential debate and schedule

The DNC debate schedule is coming together, with the organization going with a "the more debates, the better" mentality. The exact dates and locations haven't all been decided yet, but here's what the debate schedule looks like so far.

There may be more Presidential debates between January and April, if need be, but the dates or even windows in which they will happen aren't known (or decided). The Iowa Caucus happens on Monday, February 3, and the New Hampshire Primary is on Tuesday, February 11, so there may be one or two more important debates in 2020.

Who won the Democratic debate? Well, if you're talking about who is trending in search, it may surprise you that author Marianne Williamson led the pack in the first hour, according to Google Trends. This despite having perhaps the least experience in politics on the stage. It helped that fewer people knew who she was, so that lent itself to more active searches.

Less of a surprise was that Joe Biden, Kamala Harris, Andrew Yang and Pete Buttigieg were all tied for second place. The search for Kamala Harris was up 500%, according to NBC News' post-debate analysis.

From night 1, Julian Castro got the most nods from NBC's post-debate panel, while Kamala Harris was praised during night 2. The Drudge Report [unscientific] poll has Yang leading with a 28.44% (12,468 votes), as of reporting. The next highest is Kamala Harris at 15.09% (6,639 votes), so there's quite a gap between spots 1 and 2.

Remember – the debate happened 495 days from the 2020 Presidential election, so as you replay the full debate video and you and notice any gaffes, don't sweat it. There's still time for your favorite candidate to recover, as we're still so early in the process. Four hours of a live video over two nights seems like a lot, but it's just the start.

It was easy to tap into the Democratic Presidential Debate 2019 live stream due to the fact that streaming technology has progressed since the last election. We've come a long way in four years – at least in some ways.

The official debate started at 9pm, and you could have started watching video of the pre-debate coverage starting at 7:30pm, according to NBC News. That's an hour and a half before broadcast stations got the live feed.

The best part about the live stream is that there are no real commercials. NBC has been showing some house ads for their own television content and going over the voter statistics during breaks approximately every 30 minutes.

You were also be able to live stream it from Facebook, Twitter, and Hulu, although Hulu live had some technical issues for us. NBCNews.com and MSNBC.com may be a better choice for people who want the Democratic Debate 2019 uninterrupted.

Broadcast and cable stations provided offline users a way to watch: NBC, MSNBC and American-Spanish-language channel Telemundo were all carrying the second night of debating.

Finally, you were be able to live stream the debate on the go. The iOS and Android apps for NBC and MSNBC mirrored the video from broadcast sources.

This debate video featured Elizabeth Warren, Beto O'Rourke, Corey Booker and seven other contenders debating issues including immigration (the hottest topic of the night), the economy, and climate change.

Don't see your favorite contender? Joe Biden, Bernie Sanders and eight others have been split up into the second night's Democratic debate.

The DNC thought the stage would be overcrowded with all 20 debaters up there at once. So we got a total of four hours of the Democratic Debate 2019 live stream.

In hopes to avoid front-loading one night over another, the event’s organizers split the candidates into two groups: those who polled above 2% (including Senator of Massachusetts Elizabeth Warren, Vice President Joe Biden, Senator of Vermont Bernie Sanders, Senator of California Kamala Harris and Mayor of South Bend, Indiana Pete Buttigieg) and those below 2%.

These were randomly split between the two nights, though that ended up with Warren the biggest candidate on Wednesday and Biden, Sanders, Harris and Butteigieg among the ten lined up for Thursday.

How to watch the Presidential Debate outside the US

If you happen to be out of the country and want to watch the debates on a live stream as described above, you may find that the coverage is geo-blocked (broadcast networks have gone this in the past). So if you're absolutely determined to live stream the event in the future, you can try downloading and installing a VPN to relocate your IP address to one in the US and watch as if you were back there. It's actually really easy to do.

Our pick from the top providers out there right now is ExpressVPN - that's because it's so secure, fast and simple to operate.  Plus you can try it out with a 30-day money back guarantee, and claim three months free with an annual plan. To read more, check out our run down of today's greatest US VPN services or head to the ExpressVPN website.