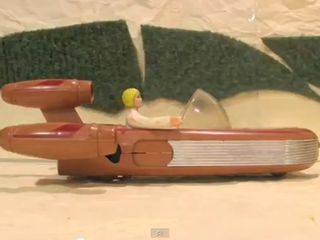 The Star Wars Uncut project, which is compiled from fan-submitted interpretations of every scene in the first movie, passed one million hits on YouTube in three days.

The new version of George Lucas' 1977 film Episode IV: A New Hope is made up entirely of 15 second clips send in by Force loyalists since the project was conceived in 2009.

Although the clips have been available on the Star Wars Uncut website for a while, the entire film was uploaded to YouTube for the first time last week.

"Finally, the crowdsourced project has been stitched together and put online for your streaming pleasure," said project curator Casey Pugh.

"The director's cut is a feature-length film that contains hand-picked scenes from the entire starwarsuncut.com collection."

The video is also available to watch on Vimeo, where it has garnered 300,000 views.

Lucasfilm has apparently, and somewhat surprisingly, been supportive of the project which appears in its entirety in the video below.