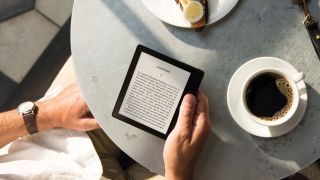 Having already launched a while ago in the US and UK, Amazon’s Kindle Unlimited subscription service has finally landed in Australian today.

Kind of like Spotify for bookworms, Kindle Unlimited offers over a million titles to read for a monthly fee of $13.99 after a 30 day free trial period – that’s less than the price of your average bookstore purchase, but more than the price of a library card, provided you stay away from late fees.

Subscribers can dig into bestsellers like the Harry Potter series, Robert Ludlum’s The Bourne Enigma, City of Bones, and The Dressmaker, as well as tens of thousands of titles from Australian authors, including The Ladies of Missalonghi, Before It Breaks, Mullumbimby and Tess McCallum’s Outback Romance Series.

Alternatively, you could instead choose to read the first sentence of Moby Dick over and over, until you’ve actually convinced yourself that your name is Ishmael.

Rekindle your love of reading

The service also offers an enormous range of Kindle-exclusive titles, such as Torn Trousers by Andrew St. Pierre White, Sleep Tight by Rachel Abbott and The Dead Series by Helen Durrant, and if you prefer short stories, the service also provides hundreds of books that are 100 pages or fewer, including Kindle Singles from accomplished authors like John le Carre, Stephen King and Carol Drinkwater.

Kindle Unlimited is available for the recent Kindle Oasis and all other Kindle devices, which are now available to buy at all JB Hi-Fi stores across Australia, and the iOS, Android, PC and Mac Kindle apps.