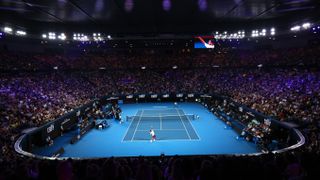 The decade's first major tennis tournament - the 2020 Australian Open - has certainly lived up to the billing. But now it's almost over, with one final having been decided and just one more to go. We'll tell you how you can watch all the tennis action unfold from absolutely anywhere in the world with our handy Australian Open live stream guide below.

The action starts most days at 11am AEDT, that's midnight GMT, 7pm ET and 4pm PT. And then the evening sessions start at 7pm AEDT (8am GMT, 3am ET, midnight PT).

Local heroine Ashleigh Barty was the name in the frame to take the women's tournament but little-known American Sofia Kenin stopped her from making history by grabbing a semi-finals win. She then met and beat the the impressive Garbine Muguruza on Saturday, tp record her first ever Grand Slam win.

The start of the 108th edition of the Aussie Open saw the aforementioned Novak Djokovic and Naomi Osaka defending their titles with the latter falling to the awesome Coco Gauff.

It's all set for a fantastic last few days of action. Find out how you can live stream Australian Open 2020 tennis action from wherever you are in the world below.

Not only that, but every match on every court will be streaming for free on 9Now, too. That means up to 16 live streams available at any one time.

How much do the winners get at the 2020 Australian Open?

There’s a record prize pot of AUD$71 million in prize money up for grabs in Melbourne this year. Both the Men’s and Women’s winners this year will each pocket a tidy AUD$4,120,000.

What is the format of the Australian Open tennis?

The Australian Open is played at Melbourne Park, which is located in the Melbourne Sports and Entertainment Precinct; the event moved to this site in 1988.