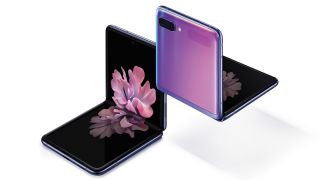 At Samsung's Unpacked 2020 event, it unleashed its fresh range of Galaxy S20 flagships, but alongside them, the South Korean tech giant also announced its second attempt at an Android foldable phone.

The Galaxy Z Flip differentiates itself from the Galaxy Fold by possessing a form factor more akin to the flip phones of yore...

Just like the recently launched Motorola Razr, it folds vertically, clamshell style. This makes for a much smaller footprint when folded and in your pocket, but unfurls to present a full 6.7-inch display, similar to those found on most modern smartphones.

While it doesn't pack in cutting-edge internals to the same degree as the Galaxy S20 Ultra, what it lacks in raw power it arguably makes up for in novelty.

Unlike other folding phones, the screen is made from ultra-thin glass (UTG) rather than plastic, which feels closer to a regular smartphone screen than its competitors. It also sports a small external display for notifications, incoming calls and similar info.

For a closer look at the details of this flipping marvel, take a gander at our Samsung Galaxy Z Flip hands-on review.

What's it cost and when's it land?

Australian pricing and availability hasn't yet been announced, but if you're keen on picking one up you can pre-register your interest at Samsung's official site.

Given the brand's history with pre-order offers, there's every chance that, just like the Samsung Galaxy S20 range, you'll be getting a bonus pair of Samsung Galaxy Buds+ true wireless earbuds (valued at AU$299) if you pre-order, but as with everything else about the Z Flip in Australia, that hasn't been confirmed at this stage.