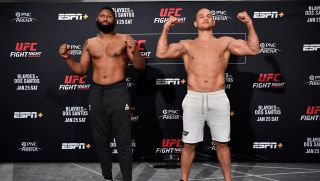 Two of UFC's most highly rated heavyweights go into battle in North Carolina on Saturday night. It's shaping up to be one of Fight Night's most intriguing clashes for some time, and you watch every moment as it happens with our UFC live stream guide below.

Illinois' Curtis Blaydes faces former champ Junior dos Santos in a showdown that both men will see see as a stepping stone to a title shot against current belt holder Stipe Miocic.

Today’s Fight Night will be held at the PNC Arena in Raleigh, North Carolina.

The two fighters share a common low point, having both been on the receiving end of defeats to Francis Ngannou, with Dos Santos losing TKO to the Cameroonian-French star in his last outing. Despite those setbacks, past form shows both brawlers remain more than worthy challengers for the heavyweight crown.

Blaydes boasts a bunch of formidable stats including nine out of his 12 wins coming via KO, and holds also the record for the most number of takedowns in UFC's history. And prior to his defeat to Ngannou, Dos Santos had been on an impressive streak of three wins against big hitters Blagoy Ivanov, Tai Tuivasa and Derrick Lewis.

It looks set to be an enthralling showdown and its you can watch the action in its entirety by following our UFC Fight Night live stream guide below.

How to live stream UFC online in the US

Subscription service ESPN+ has the broadcast rights in the US for all UFC Fight Nights and PPVs. The broadcasting giant's online subscription platform also gives you access to big-ticket tennis, soccer and boxing events.

It costs $4.99 per month - so it's reasonably priced, and less than streaming services like Netflix (and a lot less than cable). That lets you watch online, but also via its mobile app and TV streaming apps on Apple TV, Amazon Fire TV, Roku, PS4 and Xbox.

The UFC's own Fight Pass streaming subscription service is also available costing $9.99 per month or $95.99 per year, which gives access to a wide library of archive fights, features and some exclusive bouts. But since the shakeup caused by ESPN+'s exclusive broadcast deal which has seen live coverage of main events along with PPV fights and PPV prelims move to that service, we'd now only recommend Fight Pass to the most ardent of MMA fans.

Live stream UFC from outside your country

Worry not if you're a huge UFC fan but aren't in the US to watch that ESPN+ coverage this weekend. If you've got your subscription sorted but then find the coverage is geo-blocked, you can try using a VPN to change your IP address to a US server and watch as if you were back at home.

Virtual Private Networks are also handy if you're concerned about streaming safely on the web, thanks to the encryption they use to hide your details. And the best won't log your personal information, either. We've tested hundreds of VPNs and can recommend ExpressVPN (it even comes with a 30 day money back guarantee).

Simply put, this is our pick as the #1 VPN in the world right now. You can watch on many devices at once including Smart TVs, Fire TV Stick, PC, Mac, iPhone, Android phone, iPads, tablets etc. Check out ExpressVPN and get 3 months FREE on an annual plan.

MMA fans in the UK can watch Saturday’s Fight Night 166 on subscription channel BT Sport. Coverage of the prelims starts on BT Sports 1 at 11pm GMT, with the main programme starting at 1am in the early hours of Sunday morning on the same channel.

If you're looking to stream the action, the BT Sport app or BTSport.com is where you need to go, enabling mobile, tablet and PC viewing.

Canadian Broadcast rights for tonight's Fight Night belong to TSN. So that means you can access this via your TV, online or on the TSN app if you have access to the service.

Coverage of Blades vs Dos Santos begins at 6pm on TSN5.

How to live stream Blaydes vs Dos Santos in Australia

ESPN Australia has the broadcasting rights to UFC in Oz and is available via Foxtel. The Sports Pack costs $25 per month on top of the base $49 per month Foxtel Plus Pack.

ESPN2 is the channel to go for tonight with Prelims beginning at 10am AEST on Sunday, with the main card programme starting at midday.

Australians can also live stream the action via the Kayo Sports streaming service, which features no lock-in contracts and also includes access to over 50 sports, both live and on demand.

To take advantage while you're not Down Under, follow the VPN advice towards the top of this page.