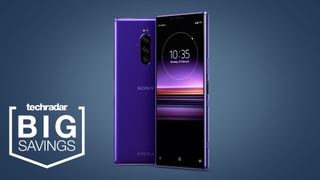 If you're looking for some great Black Friday smartphone deals, Amazon has you covered, because most of the Sony phones released in 2019 have just had their prices slashed.

That includes the Sony Xperia 1, Xperia 5, Xperia 10 and Xperia 10 Plus. Yep, that's the Xperia 5 released only a few months back, a surprisingly new phone to be seeing such a big price cut. It's a compact version of the Xperia 1 from earlier in 2019, which is currently Sony's most premium phone.

Joining those two are the Xperia 10 and 10 Plus, released in early 2019, and while we didn't rate them as highly as the Xperia 1 and 5, they're still decent phones for people on a budget.

Discounts range from £100 on the budget devices to over £200 on the Sony Xperia 1, so you're certainly saving a lot in these Black Friday phones deals. If you're looking to buy some of the newest smartphones in 2019 and like Sony phones' long aspect ratio, impressive processing power and more, then we'd recommend jumping right into these deals!

Sony Xperia 1: at Amazon | SIM-free | £639
Save a whopping £210 on Sony's most premium handset of 2019 in this fantastic Black Friday phone deal. Enjoy the iPhone-rivalling processing power, fantastic screen, and bespoke film-making app with this great device. This also comes with a 64GB memory card for those who like their apps or take a lot of pictures.
View Deal

Sony Xperia 5: at Amazon | SIM-free | £549
The Sony Xperia 5 is arguably a step up from the Xperia 1 since it retains many of the bigger phone's features yet has a better battery life, easier one-handed experience and, most importantly, costs less. Now it's even more affordable thanks to £150 off.
View Deal

Sony Xperia 10 Plus: at Amazon | SIM-free | £249
The Sony Xperia 10 Plus has quite a big screen for a budget device, and it's got pretty decent battery life too. Thanks to this Black Friday phone deal it's now at a pretty good price tag, so if you want a Sony phone that won't break the bank, this could be it.
View Deal

Not in the UK? These are the best prices we can find on Sony phones in the US (at least the phones Sony released in the US, as it doesn't with all its handsets):