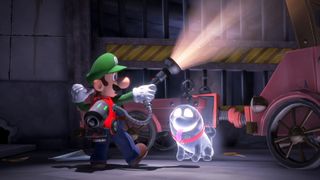 Is there a better time for a ghost story than Christmas? A quick look at just how many adaptations of Charles Dickens' 'A Christmas Carol' there has been suggests not. Why not add a little more spook to your Switch this festive season, too?

The fantastic Luigi's Mansion 3, exclusive to the Nintendo Switch family of games consoles, is getting a rare discount over at Currys at the moment, down to just £36.99 for a saving of £8:

Luigi's Mansion 3 – £36.99 (save £8) at Curry's
All the fun of the Ghostbusters films with all the charm, wit and creative flair of the Nintendo team, Luigi's Mansion 3 is a comically-spooky, puzzle filled adventure that every Switch owner should play.View Deal

Another perfect example of Nintendo's bottomless imagination, Luigi's Mansion 3 puts the second-in-command Mario brother on the hunt for ghosts around a haunted hotel.

With wonderful Pixar-like visuals, gags aplenty and secrets to uncover, it's a great family-friendly title to enjoy over the holiday period. It's also one of the best games on the Nintendo Switch (and is compatible with the portable-only Nintendo Switch Lite, too) and, being a first-party Nintendo game, you're unlikely to see its price drop dramatically more than this any time soon.

We said in our preview:

"Luigi's Mansion seems to have truly found its home on the Switch – it's just the kind of light-hearted romp the hybrid console was made for.

"While more content and features have been added to modernize the franchise, the heart of Luigi's Mansion remains the same, and it's a pleasure to see Mario's often-overlooked brother stepping into the limelight."

Also note that Curry's is offering 25% off Sandisk Nintendo Switch storage cards with the purchase, letting you up the storage space on your console on the cheap, too. Handy, for all those new games you'll be getting under the tree this Christmas, right?

Luigi not the plumber you're looking for?

If Luigi's Mansion isn't your thing, Currys has a few other Nintendo Switch games on sale ahead of Christmas. Give the following a look instead:

The Legend of Zelda Link's Awakening - £36.99 (save £13)
Bringing a GameBoy classic bang-up to date for modern audiences, Link's Awakening reminds us what a classic, traditional Zelda game was like (and why we loved them) after the monumental Breath of the Wild. If you're a new subscriber, the deal also includes a 6-month pass for Spotify Premium music streaming.View Deal

Crash Team Racing Nitro-Fuelled £22.99 (save £12) at Curry's
Seen everything that Mario Kart has to offer? Crash Bandicoot's cart racer is great fun if you need an arcade racing fix. Another Curry's deal that throws in a 6-month pass for newcomers to Spotify Premium music streaming, too.View Deal