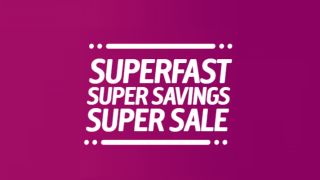 Need a new internet plan? Willing to act very fast to get it? In that case, the cheapest fibre broadband deal around by a fair distance is waiting patiently for you...well, not very patiently as it is will be gone by Thursday night!

Just like distant relatives around the holidays, Plusnet is here to present you with a gift and then quickly disappear, offering up a whopping £75 in cashback on its latest fibre broadband deal.

Take that cashback into account and Plusnet's fibre plan drops from an already affordable £21.95 down to an effective £17.78. That puts this more in the realms of ADSL cheap broadband than fibre. Or, in other words, a pretty massive bargain.

So when is this Plusnet deal departing? Coming to an end at midnight on January 16, you have just one more day to get this. But don't worry too much if you've miss it...there is a host of other great broadband deals out there that you can see below.

Plusnet Unlimited Broadband | 18 months | 36Mb average speed | Free calls to Plusnet customers | £21.99 per month | FREE activation | £75 cashback
When you take into account that cashback on offer, this becomes the cheapest fibre broadband deal around right now. With an effective price of £17.78 for speeds averaging 36Mb, this will be a plan worth grabbing before it quickly goes.

What other broadband deals are available right now?

Not a fan of the Plusnet broadband deal above? Not to worry, there are a number of other great options if you're willing to spend a bit more.

Vodafone's Superfast fibre 2 plan seems like the obvious choice for anyone needing fibre, coming in at just £23 a month. That's the same cost as Vodafone's cheaper fibre plan, effectively getting you a free boost to your speeds.

Or, if you're looking for something from BT, it's Superfast Fibre broadband deal is looking like a solid choice. Offering speeds averaging 50Mb for a price of £28.99, this is already cheap for BT, throw in the £70 reward card and it gets even better.