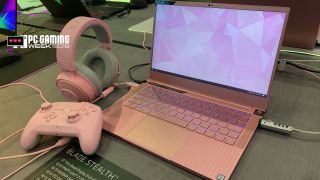 It's PC Gaming Week, and that means we're taking the time to really dig in and celebrate everything that makes desktop computing the most powerful gaming platform. And, really, it's impossible to talk about how big PC gaming is without exploring all the unique peripherals and systems that make its experiences so wonderfully diverse.

And, of course, there's no talking about gaming peripherals without bringing up Razer. Established way back in 2005, Razer has always been at the forefront of PC games, creating some of the most iconic designs and even popularizing RGB. In fact, there are some people out there that call this titan of gaming hardware manufacturing "the Apple of PC gaming." Looking at laptops like the Razer Blade and Razer Blade Stealth, that label really isn't far off.

So, when we got the opportunity to talk to Razer co-founder and CEO Min-Liang Tan at IFA 2019, we jumped at the opportunity. He dove into the mindset behind the new Razer Blade Stealth, a laptop that we got a chance to play with at the tech show, and how it's at the forefront of a new category of gaming laptops.

On the front lines of innovation

The saga of the Razer Blade Stealth began eight years ago, according to Min-Liang Tan.

"We called [it the Razer Blade], and we had a whole lot of flak, we called it ‘the world’s first true gaming laptop’. We had a whole bunch of people going “Razer, you’re just blowing smoke up my ass, right? Because, there’s gaming laptops today” and, I said “no, they are gaming luggables”".

If you look back at the gaming laptop scene almost a decade ago, you can kind of see where Tan is coming from. In his words, it's "because, 8 or 9 years ago, all these [gaming laptops] were 2 inches thick and nobody really wanted one, because it was so heavy, we were the first to, and that’s why I said we were launching the world’s first true gaming laptop."

The first Razer Blade wasn't nearly as thin and light as the current model, much less current competitors like the MSI GS65 Stealth. But for its day, it was slim and very fast - but Razer still faced some doubt back then.

Min told us that "people said “you’re just doing a niche, nobody is going to pay that much money for a thin and powerful” but the entire industry today has gone the same way." And, we don't know about you, but we have definitely noticed that a lot of gaming laptop manufacturers are starting to make devices that can actually fit on your lap. It seems like Razer is completely keen to stay in that lane too.

We actually pointed out devices like the recent Alienware Area-51m, a desktop replacement device that allows users to upgrade the processor and graphics card. But, Razer isn't interested. Min-Liang Tan, who heads up Razer's design, wants folks to know that "basically I design stuff I want to use myself", so when at the desktop "I want something ultra modular, I want something super powerful, I want to have all the bells and whistles. Why? Because I’m sedentary, I’m at my desktop, I’m in my home, and that’s what I design it for."

But, that obviously carries over into his laptop design. "Now, I designed the Razer Blade primarily for one thing: I needed a laptop for myself. And, back then, laptops were super thick, super heavy. But, that’s not the laptop I want," Min tells us "I want something I can travel with, I want something very light. But, because I want to play games, I need something really powerful but thin and light at the same time."

So, basically, you shouldn't expect a modular laptop from Razer any time soon (or ever.)

But didn't Razer have a concept desktop that had modular components? Well, yes, but instead of it becoming a product, according to Tan, "that technology, which was really about the hotswapping modular, kind of plug and play CPU/GPU technologies is actually the Razer Core."

Razer is definitely more interested in crafting thin laptops that can pack a punch, rather than those thicc desktop replacements that you need a forklift to move around.

Naturally, because Razer is trying to craft new laptops that are thinner and lighter to give gamers better on-the-go options, the Blade Stealth emerged.

For a while it just existed as this gaming-flavored Ultrabook, but at IFA 2019, Razer managed to shove dedicated graphics in there, transforming the device completely.

At the show, Min told us that "Today, we’re launching the world’s first Gaming Ultrabook, 6 months later, I guarantee you, the entire industry is going to see gaming Ultrabooks everywhere", just like Razer released the first "true gaming laptop" 8 years ago. Now, we're definitely into the idea of a 13-inch gaming Ultrabook. Just imagine: a MacBook Pro-sized device that you can carry with you, and play the best PC games on while traveling. That's definitely the guiding principal behind the Stealth, too.

"[the Razer Blade Stealth] is designed for myself," Tan explained. "Because I’m in a different city every 5 days, I want to have something I can carry around and play but not have to compromise on my gaming experience."

He pitched the idea of the laptop, saying "It’s one thing to have to dial down all your settings, and something like that, but it’s another thing to be in a hotel room, you jack it in, and boom, you play an hour or two. You know, it’s great."

In our (admittedly limited) time with the new Razer Blade Stealth, we were able to run Wolfenstein Youngblood at 1080p. And, while we were playing with the settings on medium - not the high-caliber graphics that make the game sing on proper desktop gaming rigs - that's about the same experience as you'd get on a console. All with a device that you can easily carry around in your backpack - which is definitely Razer's design goal.

Razer is even working on a mobility line of peripherals to go along with that mindset "Sure, well you can see our Mobility line, which is doing really well. We’ve got the Atheris, which is a Bluetooth 2.4GHz laptop mouse." And, while products like the Atheris will obviously not be as fully featured as more intense desktop peripherals, that's all part of the plan, according to Min. "The laptop mouse in and of itself is all about portability, so you sacrifice some of the ergonomics, when it comes to it. Why? Because you need to throw it in your bag, you need to be able to bring it around."

We think this new Blade Stealth is just a sign of how gaming has transformed over the last few years, and we imagine it will be super popular with folks that like to play their esports titles on the go. All in all, the gaming-on-the-go future is looking bright.

We don't think Razer is going to jump into mainstream computing, to compete with the likes of Dell or Apple directly, and neither does Tan.

"My take has always been that Razer will never go mainstream, mainstream will come to us," Tan said. "Someday we’ll see esports at the olympic games, which we are slowly hearing discussions about, we’re going to see gamers everywhere."

Don't think that Razer plans to sit on its laurels any time soon, either. When we asked Min-Liang Tan whether or not Razer will be ready to jump on whatever trends pop up.

"Everything we’ve done has started with a niche, but we’ve made it into a category or an industry. When we invented the world’s first gaming mouse, we didn’t just invent a category, we invented this entire industry," Tan remarked. Razer has obviously been at the forefront of the gaming space before, and now it's doing it again, and will continue to do so in the future.

No matter what happens, Min assures us that gamers will stay at the forefront of Razer's focus. "What I’m happiest about is that we just didn’t want to sell out, we just wanted to stay hyper-focused on the gamer."

Its refreshing to see a hardware manufacturer, especially on the level of Razer, that's willing to stick to its roots, no matter how awesome a Razer 2-in-1 laptop or toaster would be.