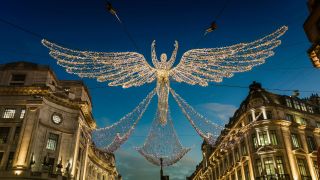 Ah, Christmas! ‘Tis the season for making snowmen and having snowball fights (if you’re in the colder climes of the Northern Hemisphere) or, for those in warmer climates, donning thongs (footwear, mind) and a Santa hat to spend a relaxing day on the beach, gorging yourself on prawns and mangoes. But no matter where you are, it’s the time of year for family, friends, lights and decorations.

Almost every town and city around the world has Christmas displays during December, giving locals and tourists something to enjoy and, of course, to photograph.

However, capturing unique and well-framed shots of these gorgeous displays can be hard, particularly when some displays are large or when you’re uncertain how to set your camera to photograph string lights. If you’re after images you can show off, or turn into Christmas cards, we’re here to help you figure out how.

To shoot Christmas light displays you’re going to need a camera with a manual mode so you get maximum control over your shooter. You’ll need to change shutter speed, aperture size and ISO occasionally, depending on what you’re photographing. You’ll also need a tripod, particularly if you’re going to use long shutter speeds and, for versatility, you can pack a good quality wide-angle zoom lens.

There are a couple of other items you can consider carrying with you, if you’d like to get creative. The first is a macro lens to shoot close-ups of individual decorations, while the second is a cross screen filter that adds starburst effects to lights – in case you’d like to add a touch of sparkle to some of your shots.

If you have the time and the inclination to do some craftwork, then you could even make some bokeh cards. All you need is some black cardboard, a hobby knife and a pair of scissors. Just cut a circular piece of the black cardboard so it can be fitted over the lens like a hood, then carve out the shape you want the bokeh to look like in the centre of the circular piece. You need just the one cutout.

Stick the cardboard onto the front of your lens, set the camera to its lowest aperture (aka completely opening it), and you’re all set. It’s cheap, it’s easy and you can make as many as you want.

Shoot at dusk or twilight

Light displays won’t be switched on before sunset, so the best time to head out to capture those beautiful Christmas displays would be around dusk or twilight. That’s also when there’s just a hint of light in the sky to add some soft textures to you images, but you don’t need to worry if you miss out on the blue hour. Nighttime photography lends itself very well to capturing Christmas lights as well.

Christmas displays can be popular places, meaning you may not always find the best vantage point to shoot from. However, if you can locate higher ground – a balcony or rooftop – you can get some beautiful wide-angle shots of entire displays. Also look for spots where you can frame your image well. Any element that lends itself to leading lines (anything that draws attention to the subject along a line) would be excellent. Leading lines can be anything from bridges to cobblestones, or even escalators if you are shooting indoors.

If leading lines aren’t an option, then frame the Christmas tree or a display in another way – within an arch or under a dome. Be sure to look around you – there will be great spots to shoot from so you can find unique angles.

Say no to the flash

When you capture lights, the camera’s flash is useless. In fact, it will overexpose the frame and wash out the colours of the scene. It will also end up highlighting unwanted details, like the wires of the display, as they are darker. So no matter what time you head out to capture Christmas lights, stay away from your camera’s flash if it has one.

A camera is able to detect the amount of light entering it by using a metering sensor, which then automatically adjusts exposure for that particular setting. To capture light displays, where brightness can vary across the scene, it’s best to dig into your camera’s menu system and select multi-zone metering (that’s called Evaluative on Canon shooters, while Nikon calls it Matrix metering), although many cameras come with this as the default setting. This will detect light from across the entire frame using several metering zones and optimize exposure accordingly.

Christmas lights tend to flicker, or there could be some missing or not working along a string, which the camera can pick up as an ungainly black spot when shooting at high shutter speeds. So we’d recommend trying shutter speeds of about 1/125th of a second, which should be enough to make the lights look smooth and decently sharp as well.

However, feel free to use slower speeds as well, particularly if you’re on the street, as light trails from passing traffic can add some interesting dimensions (even leading lines) to your photography.

There’s no perfect aperture setting for Christmas displays. You can experiment with a wide open aperture (a small f number) to capture a sharp foreground with lots of bokeh in the background, while a smaller aperture (higher f number) can sharpen the entire frame. So the aperture setting you choose depends on what you’re actually going to photograph. To keep things simple, an aperture of about f/8 will keep the frame sharp and will offer a bit of depth of field as well, but feel free to experiment.

Remember that when you change shutter speed and aperture, it also changes the amount of light entering the camera. That means you’ll also need to tweak the ISO levels so that you don’t underexpose or overexpose your shot.

High ISOs can add noise (grain) to nighttime photography and blur out details. So if you’re using a slower shutter speed, we’d advise you to start at base ISO (100 or 200, depending on the camera) and then move up, but be careful with values over 400 as that’s when noise can become a problem, particularly for older DSLRs. Most modern mirrorless cameras and DSLRs, though, should be able to handle higher ISO (at least till 6400) with ease.

Have fun with bokehs

Christmas is a great time to capture those gorgeous bokehs (aka the blurry background lights that add mood to an image). There will be so many lights around that you can fill an entire frame with them, so go crazy. You can even use a macro lens for this, if you’re shooting indoors – focus on a target and let the background go really blurry.

While the displays themselves are worth capturing, there will be other things to shoot as well. If you happen to be at a Christmas fair, try setting up you camera with a slow shutter speed to capture the rides, or the people (your family included) laughing and enjoying the season.

A few other tips

White balance: Christmas displays are essentially strings of LED lights, meaning you may need to change your camera’s white balance to ‘tungsten’ or ‘incandescent’, usually denoted by a light bulb icon. This will remove the yellowish hue (colour temperature) that may be found on images shot on Auto (AWB) or the daylight setting when shooting under artificial lights.

Add some sparkle: While you can use a cross screen filter to add starburst effects to lights, it can even be done in-camera without the need for a filter. When zooming in on lights on a tree, try using a small aperture (f/18 or smaller) to reduce the light entering the camera to a minimum.

Shooting indoors: When capturing the spirit of Christmas at home, you can use your camera’s flash if you’re shooting portraits. This will help highlight the main subject from the rest of the scene but be careful to not overexpose any lights within the frame itself.

No 'real' camera? Your smartphone will do: If you don't have a camera with a manual mode, most recent smartphones will do a decent job as well, particularly if they're flagships made in the last year or two. The Google Pixel 3 and Pixel 4 range, Samsung Galaxy S9 and above, or even Huawei's Mate P30 handsets are some of the best camera phones around, and will do a great job when shooting nighttime light displays. If your phone has a dedicated night mode, be sure to switch to that but, for the most part, modern handsets do automatically detect the scene and adjust settings accordingly.

Put your camera away for a bit: Concentrating on your photography is all well and good, but don't miss out on the joy and the spirit of Christmas while you're taking your shots. Every once in a while put your camera down and take it all in – maybe enjoy a hot cocoa (if you're in a colder climate) or get yourself a snack at a stall and look, actually look, at what's happening around you. You might even see some things to shoot that you wouldn't otherwise have thought to capture.