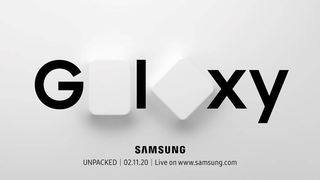 The wait for the Galaxy S11 is almost over, as Samsung has officially announced the date for its next big smartphone launch event: Tuesday, February 11.

Samsung's Unpacked keynote will take place in San Francisco at 11am Pacific Time on February 11, according to the official invite sent to TechRadar and other media outlets. This mirrors last year's Galaxy S10 launch event timing and city.

There are some differences in 2020: we're expecting three Samsung Galaxy S11 phones instead of four, all containing a 5G modem. That means there’s no need for a sequel to the standalone Galaxy S10 5G. While we still expect the new phones to be dubbed S11, there have been rumors of Samsung will leapfrog nine names and use the Galaxy S20 numbering scheme.

The Samsung Galaxy Fold 2 could show up at the Unpacked event as well. And, if Samsung has sorted out the issues that held up the first Galaxy Fold, the new model could manage to launch on time (last year, the Galaxy Fold release date was delayed by five months).

It may also take on a completely different form, as the foldable flip phone we saw in a Samsung video back in October 2019.

At present, we're expecting the Galaxy S11 line to include a base model, a S11 Plus model, and an Ultra model, per a recent rumor. The lineup is also expected to offer display sizes from 6.2 inches up to 6.9 inches.

All three should be powered by either a new Samsung Exynos chipset (most of the world) and the Snapdragon 865 chipset (likely in the US), region dependent.

Given the fact that the event lines up with 2019's timeline, we can expect to see the new Galaxy S11 phones go on sale toward the very end of February or early March, right around MWC 2020. Last year's phones were first released on March 8.

The Samsung Galaxy Fold 2 is less of a certainty. While we expect the company will include a new foldable device at its February event, there's less concrete evidence of an immediate release date. After all, there was gap between the original Galaxy Fold and the Galaxy S10 phones.

It's also unclear if we can expect the new flip phone-style design like the new Moto Razr, or whether Samsung is planning a direct follow up to the mini-tablet-like Galaxy Fold, one that's expected to have a similar design but further refinements.

The February Unpacked event isn't the only place to see new Samsung tech though. Keep an eye on our CES 2020 coverage for more, and we'll let you know if we hear more about the device from Las Vegas.