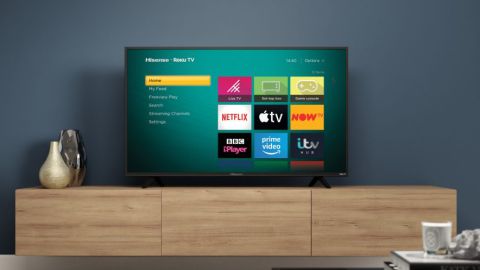 The Hisense Roku TV is a brilliant introduction of the Hisense-Roku collaboration for the UK. With a strong and vivid picture, great HDR for the price, and the Roku smart platform to sweeten the deal, this is undoubtedly one of the best televisions under £500 you can get right now.

Given how many Roku TVs Hisense has released in the US, it was only a matter of time before it launched one in the UK – and not a moment too soon. The Hisense Roku TV (R50B7120UK) combines a simple but effective Roku OS with a 4K/HDR panel and surprisingly capable audio output.

It may be housed in some cheap-looking plastic, and there’s plenty of competition at this low, low price point, but this is still a television that’s very much worth your time. With Hisense’s short-lived OLED experiment (the O8B OLED) now consigned to history, it’s good to see the company is still channeling its energies into new and exciting sets.

There are several Hisense Roku models in the US around a similar price range, although the Hisense R8F Roku TV uses a more advanced ULED display – and for now there’s only one Roku line for the UK.

The Hisense Roku TV is light – seriously light. At just 13.5kg, the 50-inch model we tested is incredibly easy to lift and carry around, making it a great choice for those who tend to move their TV between rooms or in and out of a storage closet.

The plastic casing looks and feels rather cheap, which is to be expected with such an affordable TV. However, the plain black design and silver rim is unobtrusive enough that we weren’t thinking about this much. The two feet elevate the display about 65mm from the counter, and attach to the television with little fuss (two screws each).

At the rear of the television are a USB port, three HDMI 2.0 ports, and sockets for headphones, composite, optical, ethernet and AV. The back of the television is rather unsightly, with a ribbed casing and protruding sections to house the ports, but it’s likely you’ll be placing it with the back near or against a wall, so they should remain out of sight.

The remote control has a slightly bulbous shape, but the buttons are well spaced out and responsive, and in addition to the usual numeric keys and volume, playback, and channel navigation buttons there are dedicated buttons for Netflix, Google Play, Rakuten TV, Spotify, and the FreeView Play catch-up service. There’s also a purple directional pad ripped right from the kind of Roku remote you get with Roku streaming devices, such as the Roku Express or Roku Premiere.

The TV and Guide buttons are only useful if you’re set up with live TV, with the Home button (sporting a small house icon) taking you straight to your list of streaming apps. There are a back button and return button that look quite similar, but the former is for navigating menus, while the latter is for jumping back during video play – say, when rewinding for 10 seconds during a Netflix movie.

We’ve seen plenty of Hisense TVs in the UK, but this is the first one to feature the Roku TV operating system, found on Roku-made streamers and a smattering of TVs in various territories.

Why is this so exciting? It’s not the flashiest smart TV platform out there – that accolade probably goes to the excellent webOS on LG TVs – but it is reliable, well-organised, and easy to navigate, which isn’t something that can be said for every platform. It’s also found on affordable sets like this one, meaning you don’t have to suffer bugs or messy interfaces just because you couldn’t afford a high-end OLED TV.

Opening up the Home section and clicking on ’Xbox’ here is a lot easier than sifting through sources on our Samsung TV, and we found the Roku platform as a whole full of little conveniences like these in its navigation.

The Home section lists apps, services and inputs with clear tile icons in rows of three, with a menu system that returns to the top of a section once you’ve scrolled to the bottom of it. You can rearrange the order of apps and add / remove apps from the list, and you can add an HDMI input for a specific device such as soundbar or games console.

There’s a separate section for movies or TV shows (80 in each category) accessible through the Roku interface, which directs you to streaming and rental services such as Apple TV, Amazon Prime Video, and Now TV that host the specific title.

Hitting the asterix (*) button on the remote during TV viewing will bring up sound and picture settings in a neat sidebar that doesn’t interrupt the action on-screen – we’ll run through the specifics of those settings in the sections below.

Despite its low cost, the Hisense Roku TV comes with a 4K panel, as many cheap TVs do these days, although if you’re going to be watching anything in HD resolution it can handle that just fine.

Upscaling seems minimal, though, meaning the set can’t quite make full use of the 4K panel’s pixel count for HD sources – and the resulting image isn’t overly crisp. While this wasn’t a huge issue on the 50-inch model we tested, it’s something that’s likely to be more apparent when viewing on the larger 55-inch and 65-inch screens.

We barely noticed any video noise or artefacts, though, aside from some minor issues with motion smoothing. When watching La La Land, we found the film’s long, panning shots over the city’s film sets or bustling streets suffered from some stuttering in frame rate, though the motion smoothing managed to prevent these interruptions from feeling particularly violent.

The Hisense Roku TV manages to draw a decent amount of colour out of SDR (standard dynamic range) sources, too. It’s one of the few TVs we’ve tested that fares well in this regard with the Standard picture setting, too, as the Cinema mode cuts the colour output and causes the limited visual detail to drop even further, casting a smooth-but-fuzzy filter – and, oddly, a slight yellow tinge – over the action.

Generally, your best bet is sticking with the default (Standard) picture mode, or even Vivid, which ups the colour without increasing the contrast to monstrous levels.

Things step up a notch with 4K/HDR sources. The visual detail is far more crisp – which is as it should be when watching 4K, but it’s hard to overstate how impressive the picture quality is for the set’s £379 price tag.

A lot of that is down to the HDR processing. The Hisense Roku TV can display a wide and subtle range of colours, managing not just to accurately represent tones but also display textures with aplomb. Watching The Chilling Adventures of Sabrina (season 2 – we’re a bit behind), everything from the cartoonish block colours of the opening credits to the high school’s baseball jackets are vividly brought to life. (We recommend the Dark HDR picture setting for the most cinematic images.)

The Samsung NU7100 – a 2018 TV which we awarded four stars in our review, and which cost a smidge more than the Hisense Roku at release – couldn’t get anywhere near the same levels of rich colors. It’s a testament to how much HDR capability can improve in a mere year, and also to what Hisense has achieved with its first Roku TV for the UK.

The picture quality obviously isn’t on a par with truly premium sets such as the LG C9 OLED or Samsung Q80 QLED, but the Hisense Roku TV certainly punches above its weight, with a mid-range picture quality that belies its humble pricing.

This is a great TV for gaming too – when playing The Witcher 3: Wild Hunt in 4K/HDR, we found the strong colour output of the set was perfect for the game’s sweeping vistas and colourful magical effects, while the reddish tinge of the setting sun at the end of a hard day’s questing was, if not breathtaking, certainly approaching that (the visual upgrade the game got for the Xbox One X certainly helps).

For a TV this cheap, we were pleasantly surprised by the quality of the Hisense Roku TV’s audio. Voices sound resonant, while instruments all the way from bass drums to delicate snares are drawn out clearly. You don’t get anything like Dolby Atmos support here, and various soundbars would improve the offering from the built-in speakers, but we imagine that, given the price, most people will be perfectly happy with the output as it is.

The audio settings are very much worth checking out, too. The Speech mode effectively brings voices and dialogue forward while dulling background noise, while the Theatre mode gives a boost to low, mid, and high frequencies for more impactful audio during TV shows and films. We tested these settings out with a 4K Blu-ray disc of Life of Pi, and found each setting distinct.

The Hisense Roku TV is a brilliant introduction of the Hisense-Roku collaboration for the UK. With a strong and vivid picture, great HDR for the price, and the Roku smart platform to sweeten the deal, this is undoubtedly one of the best televisions under £500 you can get right now.

Minor issues around frame rates are to be expected at this price; indeed, we would have expected worse with a TV this cheap. And you should keep in mind that the upscaling from HD only does so much here – meaning that picture quality on the larger sizes of the Hisense Roku may not hold up as well as on this 50-inch model. Otherwise, though, it’s easy – and a pleasure – to recommend this set.