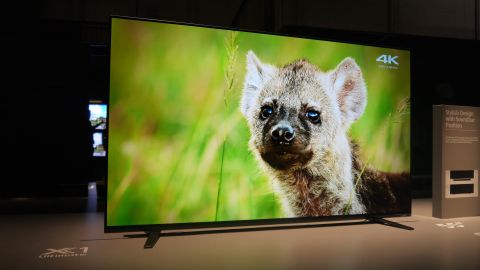 If they turn out to be fairly aggressively priced, the Sony A8H OLED TV could be the company's most all-round appealing OLED yet.

Look a little deeper, though, and the A8H has a couple of significant tricks up its sleeves that potentially make it comfortably Sony’s most all-round appealing OLED TV yet. Especially if it turns out that, as we suspect, it’ll be pretty aggressively priced when it goes on sale in the next few months.

The A8H's design is a strange mixture of sleek and clunky. Sleek is the trim silver trim running around the screen’s outer edge, and the way a single-level glass screen sits over and binds together both the 1cm or so of inner black frame and the OLED panel. Clunky is the rear, which delivers OLED’s gorgeous ultra-thin trademark look at its left, right and top outer edges, but elsewhere turns into a one of the bulkiest and most untidy back ends an OLED TV has ever carried.

While the A8H’s feet look more functional than flash, they actually hide a pretty handy trick. Namely that you can either slide the TV right down onto them, leaving practically no gap between the TV’s bottom edge and your furniture, or you can re-orient them so that they lift the TV up two to three inches. The idea being this second option is that it lets you place a soundbar under the screen, between its feet.

The X-Motion Clarity technology was originally designed for Sony’s direct full array LCD TVs, as a way of obtaining the sort of natural look to motion you get from black frame insertion technology without the heavy loss of brightness BFI usually causes. It seemed from our time checking out the 65A8 and 55A8, though, that adapting the technology for OLED has worked very well.

Dynamic shots from both Peter Rabbit 2 and a desert-set demo video that included lots of forward and sideways camera panning both looked pretty immaculate. There’s hardly a hint of unwanted motion processing side effects, and judder is reduced to a point where it looks strikingly natural without turning into the over-smooth soap opera effect. All without brightness taking a significant hit.

This is especially handy in the A8 series case, since while Sony’s OLED pictures continue to look strikingly natural and refined, especially in dark areas, they still don’t appear to be quite as bright as those of some rival OLED TVs.

The Ambient Optimization system does exactly what it says on the tin: Automatically adjusts the picture to compensate for different levels of light in your room.

This doesn’t sound like a new feature at all, initially; after all, TVs have carried built-in light sensors for years. The difference here, though, is the way the light measurement affects the picture. No longer do you just get a pretty basic and image-wide boost in picture brightness for bright rooms, or a reduction in brightness for dark rooms.

With the new Ambient Optimization system the image adjustment is much more intelligent and sophisticated, adjusting the image’s gamma curve and delivering much more local adjustments. In fact, the system seems to work so well that the adjustments made when a bright room is detected actually leave the image looking closer to the way it would have looked when it was first created in a blacked-out, deliberately neutral mastering room.

For instance, it seems that shadow details are brightened so that you can still see them without unnecessarily increasing the brightness of the lightest parts of the image, and colours seem to have their saturation and brightness slightly increased to combat the ‘flattening’ effect ambient light can cause.

For me this sort of sophisticated approach to the changing and seldom dark status of typical living rooms is long overdue, and can genuinely transform the consistency of the viewing experience - especially when it comes to watching HDR. All without, crucially, you having to keep revisiting calibration options, or switching behind different presets to suit different room conditions.

While Sony might not have come up with an all-new processor for the A8, it could argue that if something ain’t broke, there’s no need to fix it. And the presence of the widely acclaimed X1 Ultimate processor can be seen in every frame of the A8’s general picture performance, from the fantastically detailed and refined look it gives to both native 4K and upscaled HD content, through to its polished and fine colour renditions.

While it’s on the picture and design side of things where the A8’s new features mostly make their mark, it’s impressive to find that the new OLED TV also benefits from Sony’s Acoustic Surface Audio system: This excites the screen to produce sound, and as usual delivers a clean, open and direct soundstage where audio details appear startlingly accurately located on the screen. A pair of rear subwoofers boost bass levels, too.

All the new A8 picture strengths come on top of Sony’s support for Dolby Vision and Dolby Atmos; Google’s Android operating system; and a host of handy smart features, such as compatibility with Google Assistant and Amazon Alexa devices, and support for Apple Airplay 2 and Homekit.

There’s no support on the A9 for either the HDR10+ dynamic HDR system or the new Filmmaker and Dolby IQ modes that some other brands are adopting for 2020. Sony argues, though, that its own video processing is so good that it doesn’t need the help of such third party systems.

It’s a shame Sony isn’t yet revealing pricing for its 2020 TVs, as this may ultimately play a big role in how successful the A8s are. If they turn out to be fairly aggressively priced for OLED TVs, though, the fact that they only introduce a couple of really significant performance changes from 2019’s OLED models doesn’t mean those changes aren’t enough to make it a potentially very attractive TV.