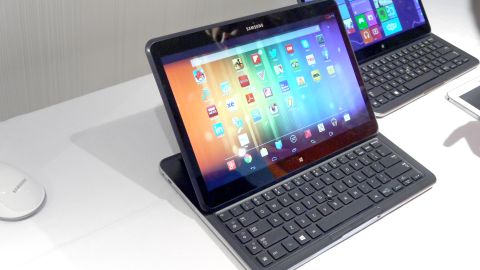 It's like two things smooshed into one. It's the future...

Samsung reckons its solved the Windows 8 / Android conundrum: stuff 'em both in one device.

But this isn't just a case of plopping in dual booting modes and letting the world work out how to get from one to another – both are operating from the same Intel Haswell chip and as such seem to fly along in both guises.

The design of the Samsung Ativ Q is impressive: with a 13.3-inch screen, it certainly feels more laptop than tablet, but the superbly high resolution display (QHD 3200x1800, which equates to a 275ppi) means that you'll be more than impressed whether you're checking out Windows 8 (the full-fat version, not the confusing Windows RT some users will have encountered) or Android 4.2.2.

The tablet/laptop hybrid is a well-designed beast, as while it's running all these different options it's not the chunkiest thing to plop in your bag. It's never going to take on the likes of the Sony Xperia Tablet Z in the design stakes, coming in at 1.29KG, which makes it quite hard to hold in one hand.

Samsung seems to think it's portable and easy to use as a tablet option, but in our tests it didn't appear to be that way at all - it almost felt like your digits were going to split in two after extended use.

It does come with a high-sensitivity S Pen to play around with though - this is a really useful choice on a tablet with a screen this size.

It's not fair to lambast the Ativ Q for weight when you consider what's included though - as there's the aforementioned Haswell chip alongside a fully-formed keyboard, complete with an old-school nipple in the middle to allow you to flick the mouse around the screen.

Samsung is making a big deal about the fact that the tablet has a million modes for looking at the screen (for a million, read four).

It can operate in tablet mode, with a quick push from the bottom settling it nicely above the keyboard. You can then tilt the screen upwards to activate 'floating' mode - although we're not entirely sure why Samsung has added that mode, as it looks like the screen is caught halfway between two settings.

Keep pushing that screen and the display will flip, and the keyboard will be used as a stand for easy breakfast eating of whatever you fancy browsing over the cornflakes. This mode impressed us the most, as it was both stable and offered the best way to interact with the tablet if you're not bothered about tapping away on the keys.

The specs of the Samsung Ativ Q are pretty decent for a tablet / laptop hybrid, with 327 x 217.8 x 13.mm dimensions making it a real boon in the back. You can plug in a USB 3.0 device, a USB 2.0 option, HDMI output, as well as a webcam capable of 720p HD video (perfect if you want to show the internet what you're up to) and a microSD card slot, which allows you to expand the 128GB SSD that's built in.

The battery life is predicted to last nine hours, with Samsung hoping that you'll actually be able to eke things out a little bit more than that with the Intel Haswell chip running things in the background. This is all supplemented with a 4GB RAM chip, as well as an Intel HD Graphics 4400 chip to enable users to have a good ol' gaming session on the go.

You can even use the device to steer racing games through the inbuilt accelerometer; however we struggled to hold it for long enough to actually do this, so while we're all for functionality, it was a little harder to see how that will be a real selling point.

Some will wonder how easy it will be to flip between Android and Windows 8, and the answer is very easy indeed. You can either jump back to Windows from Android by pressing the Windows button stuck on the bottom of the display, or you can jump the other way by using the dedicated Android icon, which appears as an icon in the Live Tiles area.

You could just jump into the traditional desktop zone and move through that way, but it's not the simplest method. The main thing to take away is that flipping between the two modes is exceptionally fast, and fingers crossed that won't slow down when you throw too many apps on there.

On the subject of apps, we were impressed with the way you could pin Android apps to the Start Screen of the Windows section, making it easy to open Google Maps without having to flip into Android mode. Most apps seemed to work seamlessly, and it was impressive that there was no lag.

The keyboard works pretty well, although the travel on the keys themselves is pretty poor, meaning you'll have to work hard to get up to a decent typing speed without making mistakes.

There are a few S Pen-dedicated apps, but the pen will work for nearly all native apps on the Ativ Q - with this device, we can really see the S Pen being a boon.

We would say there are a number of accessories available for the Samsung Ativ Q, but there's basically an overly-expensive looking cover that only those with no knowledge of the third party market will buy, and a wireless mouse, which only those... well, the same as the cover, really.

Samsung has lobbed a number of its own apps into the mix of the Ativ Q, but the real thing we liked the most is getting the best of both worlds on one tablet - the Q was an impressive beast either as an Android tablet or a Windows 8 device.

We can see this becoming a part of daily life without much of an issue, and while the weight is a lot more than you'd expect for an Android tablet, if you're considering a laptop replacement this should be a real part of your consideration.

We're still waiting to hear price, which will make all the difference, but should this sit somewhere palatable Samsung will have a real winner on its hands.