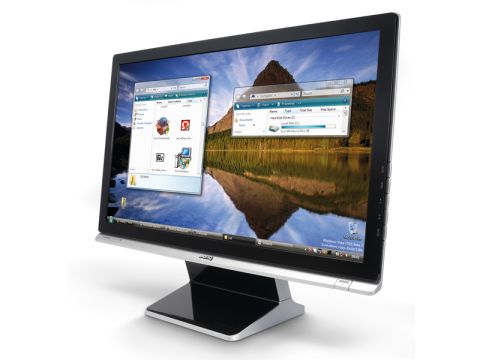 The picture quality is just average, but the E2400 is still good for general use

A versatile monitor that is let down by its screen quality

The BenQ E2400HD is our first taste of the incoming generation of 1080p 24in monitors. While the 16:9 aspect ratio is new, there's nothing novel about the LCD panel itself.

It's based on cheap and moderately cheerful twisted nematic (TN) display technology. Unfortunately, all the usual TN-related shortcomings are present.

Sadly, you can forget the quoted static contrast ratio of 1,000:1 – it's pure fiction. Vertical viewing angles aren't really a strong point, either. That said, the panel's fast response time (5ms) delivers plenty of oomph if you're an avid gamer.

It also has a full compliment of inputs, including HDMI, DVI and VGA. In that context, it makes for an affordable all-round multimedia screen for use with both a PC and games console. HD movie fanatics should look elsewhere, however.