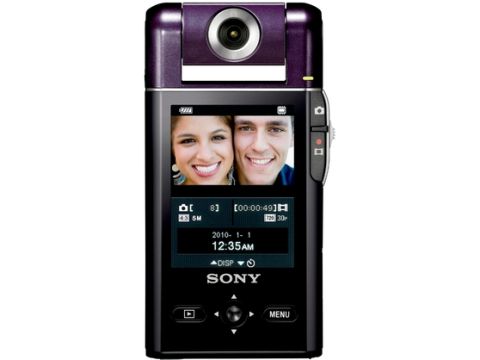 Sony doesn't want you to call it by its product name though; it wants the PM5K to be known as the bloggie…

Why the bloggie? Well, for a start the compact dimensions allow it to be carried around easily, so it's on hand to record movies and stills of priceless moments, providing a visual index for you, your family and your mates.

Also, the lens can be rotated 270 degrees, and this makes it possible to swivel it around and deliver your own piece (or video blog) to camera; great for state-of-the-nation addresses and grumpy rants.

The MHS-PM5K bloggie also offers the opportunity for quick and easy online sharing of movies and stills.

It has a built-in USB arm and can be connected to either a PC or Mac. There's software embedded on the camcorder so no installation is necessary.

The software opens when it detects the bloggie has been connected and it's possible to log on to YouTube, Dailymotion or Picasa accounts and upload videos and images almost instantaneously. Integration with Facebook is being promised, as an update, in April.

The software is also used to 'uncurl' the 360 degree videos the bloggie is capable of taking with a supplied clip-on lens. This records panoramic movies, which though they look weird on normal playback, make a widescreen impact when unfurled using the software.

Sony has used the bloggie to take a bold step, too. On the PM5K's predecessor, the PM1, recordings could only be made to Memory Stick, but now Sony has enabled the bloggie to capture on SD and SDHC cards as well.

This particular bloggie is not alone as Sony has created a trio of models in the range, so besides the PM5K, there's also the PM5 (no 360 degree recording) and the pistol-grip design of the CM5, which features an HDMI output so you can connect it to a high-def TV.