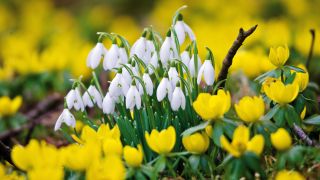 It's springtime in techland and new mobiles are budding like, um, snowdrops

Now we've got CES out the way for another year, its memory lingering in a faint cloud of disappointment and sexism, it's time for tech to get fun again. Let's get ready to rumble - and to swipe, pinch and prod. Spring has nearly sprung, and that means lots of new toys to get excited about.

For many of you the most exciting gadget of all might be Samsung's Project J, which everybody thought was the Galaxy S4. It is, but it's more too: it appears that Project J is not one, not two but three devices with the S4 and two siblings, Project J Mini and Project J Active. The former is likely to be the S4 Mini and the latter... we don't actually know, but the presence of accessories such as arm bands, bike mounts and pouches suggests something wearable.

Samsung isn't the only firm with some shiny new phones: Motorola's X Phone is expected to put in an appearance at Google I/O in May. The device was accidentally outed on Facebook-for-work site LinkedIn when Motorola advertised for an "X-Phone" product director, and according to Australian carrier Telstra it's a "real breakthrough, a game changer that will put pressure on Samsung and Apple".

Fancy another game changer? According to Xbox co-founder Nat Brown, it's the Apple TV: if Apple decides to make it a games system, which it's perfectly capable of being, it would "simply kill PlayStation, Wii U and Xbox". The problem? Microsoft lacks "a functional and growing platform ecosystem for small developers".

Ecosystems can boost or ruin devices, as HP knows all too well: its TouchPad tablet flopped, and now it's apparently embracing Android instead. The first product will be "A high-end device of unspecified size that will make use of NVIDIA's impressive Tegra 4 chip".

The move suggests that HP might be losing confidence in Windows' ability to get people excited about new kit, but Nokia clearly disagrees: it appears to have accidentally leaked its own Windows 8 tablet during a launch event for the Lumia 620 in Pakistan. The tablet, arguably tech's worst-kept secret, might just turn up at this month's MWC 2013 - and we'll be there just in case.

The Lumia might be real, but the most exciting new Apple toy might not even exist: it's Apple's iWatch, which this week went from flimsy rumour to rock-solid copper-bottomed Next Big Thing status in approximately four seconds. As Michelle Fitzsimmons reports, "a team of about 100 product designers are tinkering away on a 'watch-like device' that possibly performs some of the computing tasks currently undertaken by the iPhone and iPad."

They'll be watching you

Could the iWatch be like Pebble, the Kickstarter-funded smart watch - or might it even be a Pebble? According to Kate Solomon, Pebble's CEO is "playing it cool when it comes to talk of Apple buying it out... it wouldn't surprise anyone to hear that major tech companies are sniffing around Pebble, whose smart watch is the most-funded Kickstarter project ever".

As you can imagine, rumours are already flying. Will it have curved glass? Siri? Maps? Will it ever ship? To help filter shiny flakes of fact from a river of rubbish, we've put together a comprehensive guide to iWatch rumours, helping you separate probable fact from obvious fiction.

While the world ponders the iWatch, Gary Marshall is worried about a different kind of iWatching: gadgets that spy on you. The next Xbox will constantly listen for your commands and possibly watch you as well, and Verizon has filed a patent for a set-top box that monitors what you're doing on the sofa to better blast you with ads: "it might watch you 'talking to, cuddling with, fighting with, wrestling with, playing a game with, competing with, and/or otherwise interacting with the other user.'

"And if you do any of those things, it'll sound the klaxons and bellow STOP THAT! STOP THAT AT ONCE! WATCH THE SCREEN! WATCH THE SCREEEEEEEEEEN!" he says. The idea of a gadget "paying attention to me all the time makes me uneasy. Not because I'm paranoid, but because I've seen the patents".