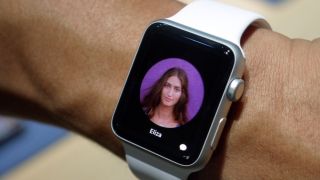 The Apple Watch: how good's the battery?

We've heard one or two whispers that the Apple Watch's battery life is going to last you a day at most, but if you've shelled out several hundreds on a wearable then you don't want it to die when you most need it.

To try and stretch out that battery life as much as it possibly can, Apple is going to integrate a special low power mode into the Apple Watch, according to insider sources who've been blabbing to the New York Times.

The soon-to-be-announced mode, dubbed Power Reserve, shows the time and nothing else - so at least you know what hour of the day it is even if you can't make voice calls due to a rapidly dwindling level of battery juice.

The anonymous tipsters who spoke to the New York Times say that Apple had to overcome several tricky engineering challenges, and at one point they were mulling over the possibility of adding solar charging to the mix.

That would certainly offer a useful alternative source of power if the battery died - assuming the sun was actually out, of course. Ultimately solar charging was pulled from the first edition, though it might return one day.

All will be revealed 9 March when Apple is holding a special event in San Francisco, California. We're expecting the wearable to charge much faster than an iPhone, even if that charge is only going to get you through a day.