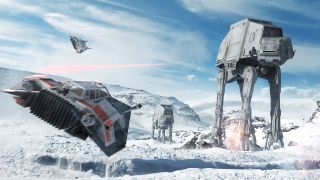 EA’s recent financial call contained a wealth of information about its upcoming lineup, but the most exciting details concerned Star Wars Battlefront 2, the upcoming sequel to the 2015 multiplayer shooter.

Thanks to past earnings calls, we’ve known that Battlefront 2 would be coming in late 2017 since November last year, but the most welcome news was confirmation that this release would include a single-player campaign.

Development duties for the new game are apparently being split across DICE (the original’s developer), Motive (the new studio headed by ex-Uncharted and Assassin’s Creed developers) and Criterion.

Criterion’s inclusion is particularly interesting, since it was the lead developer on Battlefront’s X-wing VR mission. We’re hoping its work on Battlefront 2 means that more VR missions are in the works for the new game.

Outside of the Battlefront 2 discussion, the call also discussed Bioware’s new IP. According to EA’s CEO Andrew Wilson, the new game will arrive in early 2018 and is more of an action adventure rather than an action RPG (as the studio’s previous games have been).

These games will almost certainly see a reveal at the upcoming E3 2017 gaming show, so stay tuned for more information soon.