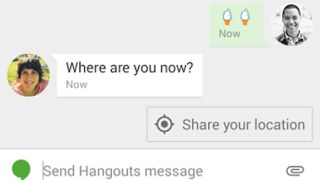 Google is already listening anyway, so why not?

Google has updated Hangouts for Android with a helpful new feature for those who don't mind the app actively listening in on their conversations.

By paying attention to what you're saying, Hangouts can offer what Google calls "smart suggestions."

For example if a friend asks where you are, the app can prompt you to share your location with them directly. Google Hangouts engineer Rhett Robinson described this feature on Google Plus as "the start of something new," though for now it's unclear what else it can do.

This Hangouts update also adds 16 new sticker packs, video filters and time stamps that let you know when your contacts were last online, plus "a few other surprises," according to Robinson.

The time stamp feature will actually roll out over the next few weeks, though, while an equivalent update for the iOS Hangouts app will take a bit longer to arrive.