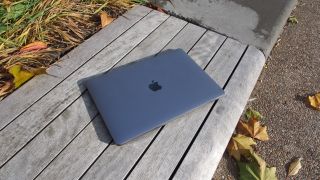 The MacBook Air is a series of subnotebook computers from Apple. It has a full-sized keyboard, a machined aluminum case and a thin light structure. The first model was released in 2008.

The MacBook Air comes with a display size of 13.3 inches. An 11.6” model was introduced for a time in 2010. Since then all MacBook Airs come with a solid-state drive and Intel Core i5/i7.

Since Apple’s discontinuation of the white MacBook in 2011, the Air is now considered the company’s entry-level laptop, and has been designed to be ultra-portable.

This year Apple released a new thinner and lighter MacBook Air with much-improved screen resolution. It has also updated the hardware making it the most expensive Air model to date.

However, the previous 2015 MacBook Air is still fast and sleek enough to warrant some attention. With Black Friday fast approaching, this model might offer the best value for money.

Like all Apple computers, the MacBook Air comes with the native operating macOS. This can present a steep learning curve for users migrating from Windows. Help is at hand however, from Apple’s extensive Support website, which provides basic walkthroughs and explanations of Mac-specific terminology.

If you are looking for a break from Windows but are not too enthusiastic about the cost of the MacBook Air, then you might want to try the Acer Chromebook 15. It runs on Google’s Chrome OS and costs $349 (£279, about AU$560).

Like Windows, Apple has its own App Store along with iTunes for purchasing music. The Air comes with the standard apps such as notes and maps. Apple free office suite ‘iWork’ apps can be downloaded via the App Store free of charge.

If you find the change to macOS too jarring, you can even install Windows 10 on the MacBook Air via the pre-installed ‘BootCamp’ utility.

The MacBook Air is a great option for budding and professional photographers. Now that the new model has 16GB RAM it is ideal for running software such as Adobe Lightroom and Photoshop.

The MacBook Air (2018) now comes with retina display, Touch ID and a Force Touch trackpad. Apple promises the battery will provide up to 12 hours web browsing/movie playback and up to 30 days on standby.

The new Air has a 13.3-inch LED-backlit glossy widescreen display. It weighs 2.96lbs which is slightly less than one of its main competitors, Microsoft’s Surface Book 2, which costs the same as the standard MacBook Air but weighs 3.38lbs.

Traditionally, critics of Apple devices have complained that they’re overpriced relative to Windows devices with similar specs. Given that the Surface Book with similar hardware is the same price as the MacBook Air, maybe Microsoft users may now feel ready to make the switch. This becomes even more likely in light of how readily the MacBook Air can run Windows 10 alongside its own macOS.

The MacBook Air also has two Thunderbolt 3 USB-C ports. Devices using this  connector can achieve much faster data transfer speeds than regular USB. As part of Apple’s plan to make the MacBook Air as slim as possible, the device uses USB-C, which means that in order to connect to regular USB devices, you’ll need to purchase a separate adaptor.

If you choose to purchase a MacBook Air there are several add-ons at checkout. These include AppleCare+ for Mac, USB-C to USB adaptor and USB-C to lightning cable. You can also browse through extras such as the Magic Mouse 2, leather sleeve cover and Microsoft Office for Mac.

Should I buy a MacBook Air?

If you’re an Apple lover on a budget, the MacBook Air is the most inexpensive option for portable Mac devices. You can even save a few more dollars or pounds by opting for the 2015 MacBook Air instead of the most recent model.

Both have virtually identical hardware specifications. However, if portability is your main concern and you can spare the extra cash the smaller, lighter MacBook may be a better choice.

Users taking their first tentative steps with macOS can also take comfort in the fact that the MacBook Air is now no more expensive than popular Windows devices such as the Surface Book 2.

Microsoft Office is also available for Mac and the MacBook Air can run Windows 10 if the transition proves too much. Although Chromebooks are readily available for a fraction of the price, they come with their own OS, meaning they cannot run the full desktop version of popular editing apps like Adobe Photoshop.