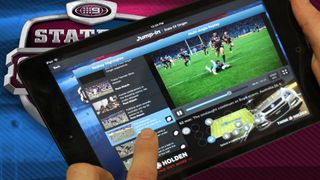 It's like you're Steven Spielberg... but with State of Origin replays...

New South Wales and Queensland are preparing their battle cries for tonight's State of Origin match, the Nine Network is offering iOS audiences a chance to pick their own camera angles for replays.

Through the Nine Network's Jump-in app, viewers will be able to watch replays within minutes from any of the 16 different cameras placed around the ground by the Wide World of Sports team.

The technology was developed by 9 Technology and was tested during a recent Kangaroos' Test against New Zealand.

There are a number of apps for footy viewing currently available in the market, but with the Jump-in official app, users will have access to the unique camera angle functionality, stats, slow-motion clips, etc.

The app is currently only available to iOS users, an while Android app isn't slated until next year, the app can still be used in web browsers.

There's still a number of hours before the match, so to get hyped up, why not download the app, read up on the stats and check out all the features so you're prepared for tonight!