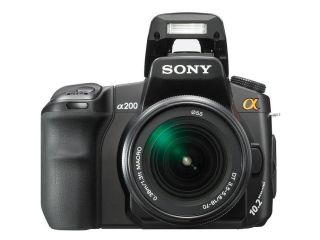 Sony's Alpha cameras have made a splash in the DSLR market

Anyone in the market for a new DSLR camera might want to hang on for another week or so to see what happens with three new Sony models that appear to have just been leaked online.

The new Alpha additions appeared briefly on Sony's Russian website, confirming that they will be the Alpha 230, 330 and 380.

At this stage, information is scarce, but it does appear the cases will be slightly smaller than existing models and that HDMI output will be added.

There also seems to be a way to control the new cameras with the remote for a Bravia TV set, although there's still no video-recording mode. We're also led to believe that the software interface has been improved.

Look out for official word on the new cameras within the next two weeks, with a pricing scheme sure to be competitive with Nikon and Canon DSLRs.