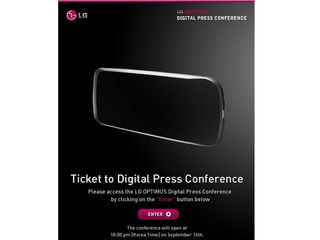 Here's the original image - what a let down

Yesterday, an image of a mysterious new phone was posted to an LG forum, and subsequently made its way to tech and mobile blogs the web over.

What could it be, the internet speculated. The Google Nexus 3? Or perhaps an Optimus Slider?

Here at TechRadar, we briefly considered posting the rumour, but something seemed a bit off; the low-res image and the poor gradienting in the top right hand corner – it just didn't seem legit.

And it wasn't; although, it kind of was. Turns out the image has been cropped from a teaser that LG did send out in September last year, for an event at which the company revealed the LG Optimus One and Chic.

Some enterprising shyster had simply done a cut and paste job on the poster, ditching the invite section and trying (yet failing) to shorten the gap between the mysterious phone and the header text.

What a disappointment for all the foaming-at-the-mouth fanboys who were so ready to believe that this would be the Nexus 3.

Don't they realise that Google will be the first to announce the next Nexus, not its manufacturing partner? Phone rumours 101, you guys.

Via PocketNow and IntoMobile