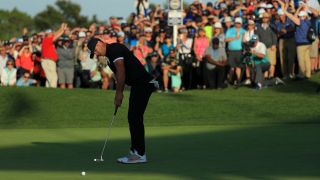 So over to you Brooks Koepka. The reigning PGA Championship champion has put himself in an absolutely dominant position going into the final 18 at Bethpage Black Course in New York and it will take a miracle (or an epic capitulation) to prevent him making it two in a row now. Golf's second major tournament of the season is here and you can get a 2019 US PGA Championship live stream no matter where you are.

101st PGA Championship - where and when

The Bethpage Black Course in Farmingdale, New York plays host to the 2019 edition of the US PGA Championship. It starts on Thursday, May 16 and lasts until the fourth and final round on May 19.

With so many elite players all vying for every major and those extravagant purses, it's rare to see a tournament being so dominated by one man. But reigning Brooks Koepka is doing just that at the 2019 US PGA.

We had expected to see Tiger Woods feature, following his miraculous Masters victory. He's failed to avoid the cut after two rounds. So where could the challenge to Koepka come from on Sunday?

World number 1 Dustin Johnson is a few shots back and well overdue a major win with still only one to his name. But he has a lot of ground to make up today. And the rest of Koepka's nearest challengers aren't exactly the most famous names in the sport - Harold Varner III, Luke List and the fantastically monikered Jazz Janewattananond woruld write themselves into golf folklore if they could somehow chase down Brooks.

Bethpage is looking like a handsome home for the 101st PGA Championship and there are plenty of places you can watch all the action, with some very easy-to-access FREE online options in there, too. Keep reading to see how to get a PGA Championship live stream from any corner of the Earth.

Well here's a stroke of good news (pun very much intended) - the official tournament website, PGA.com, is live streaming some of the best action.

But, it's by no means comprehensive. The schedule currently says that it will be showing a live stream of featured groups only, as well as holes 16 through 18. Nice if you're only interested in following the players it selects for you, but not so good if you want full and proper coverage.

Furthermore, it seems as though the free PGA Championship live stream just isn't available in certain regions, such as the UK, Australia, South-East Asia and big parts of Europe.

Aside from the US PGA live stream, we have more US watching options below.

Assuming you want better golf coverage than the limited US PGA live stream as described above, you can scroll down to discover how to watch from the UK, US, Canada and Australia.

But if you're on your holiday or abroad with work, then things become a little trickier to watch. That's because host broadcasters apply geo-blocks on their coverage. You need to find a way to bypass these blocks and watch as if you were sat back in your home country.

That's where using a VPN can prove very handy indeed. It's an ideal solution because it allows you to change your IP address so you appear to be in a completely different location - i.e. one in your home country. We've tested hundreds of VPNs and can recommend these as the three best VPNs currently available:

1. Express VPN (comes with a 30 day money back guarantee)
This is the #1 rated best VPN in the world right now. You can watch on many devices at once including Smart TVs, Fire TV Stick, PC, Mac, iPhone, Android phone, iPads, tablets etc. Check out Express VPN and you can also get 3 months FREE with an annual plan. Or, if you'd prefer, take advantage of its 30-day money back guarantee.

3. IPVanish supports up to 10 devices, so great on the go.

How to watch the US PGA golf in the US

There are number of options you can watch the US PGA golf if you're stateside:

- The live stream from PGA.com as mentioned above. Although you'll be limited to what the website wants to show you. That's looking very limited, unfortunately.

- TNT and CBS have grabbed the rights in the US this year. Cable-based TNT has all four rounds, but only the early action of the crucial third and fourth rounds. CBS will provide coverage on its website of the third and fourth round - including the concluding action - which you can also watch if you sign up to a trial of its All Access service. Great news for golf fans who don't want to shell out for a subscription.

- If you're outside the US this weekend but want to access one of the above options, then you can use a VPN service to effectively transport your computer, phone or tablet's IP back to a US location.

And they  aren't you're only options either, with all of the top US-based TV streaming services all providing an alternative. Each one offers a free trial to get you started and has masses of other content and channels for you to enjoy if you subscribe:

How to watch the US PGA Championship live: UK stream

If you're a UK-based golf fan, you'll be well used to this by now. Sky Sports has all the US PGA coverage on your side of the Atlantic. Head straight to the Sky Sports Golf channel from 4pm BST to watch featured groups. And if you're not going to be at home much this weekend, you can download the Sky Go app on your tablet or smartphone.

Don't have Sky and don't fancy subscribing just for the golf? Well Now TV may well be a decent fit for you. It costs £14.99 for a week's worth of access. And pretty much every streaming device you can think of has a Now app.

Out of the UK this weekend? Then follow our instructions above to get a VPN and watch as if you were back in Blighty.

Cable channel TSN has the rights to show the US PGA Championship north of the border in Canada, with coverage starting as early as 8am on Thursday and Friday. Corey Conners has had a strong season so far and could bring back some golfing glory to Canada.

How to get a US PGA Championship live stream in Australia

Fox Sports has bagged the PGA Championship live stream coverage Down Under. It starts at 3am (Sydney time) and you can wake up to the last few holes over your breakfast.