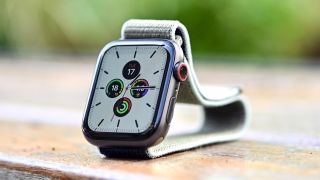 2019's Apple Watch 5 with its crown on the right hand side (Image credit: Future)

Your future Apple Watch may undergo a big change from existing devices and drop the rotating crown from the right-hand side of the device.

According to new patents - spotted by Patently Apple - the company is considering dropping the rotating crown and swapping it out for an all-digital alternative.

That would likely change the way you interact with the smartwatch immeasurably, and it's not clear from the patent whether the alternative will be able to do everything that you can currently do with the rotating crown.

Images within the patent suggest this change will be used to trim down the smartwatch's size, and that this digital crown will sit flush with the button you find on the right-hand side of the watch.

The patent suggests this digital alternative will include gesture support that may allow you to simulate rotating a crown to be able to skip through menus on the Apple Watch. It also seems to act like a button too, which will likely be used for features such as starting apps or an ECG reading.

It's clear Apple is attempting to slim down its wearable further with these ideas, but there's no guarantee this design will be used on a future Apple Watch.

Companies often patent a vast number of ideas that never get used on final products, and it may well be that this idea has already been scrapped within Apple.

While it's interesting to see Apple experiment with ideas on how to fundamentally change the design of its wearable, you shouldn't expect to see this change on the Apple Watch 6 when it likely debuts later this year. If such a change happens at all - which is a big if - it could be years away.