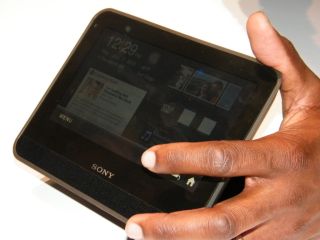 Sony's Dash is one of the devices that has most impressed us at this year's CES. The so-called "personal application viewer" is a nifty little internet-enabled device which packs a 7-inch touch screen and an accelerometer. There's also a USB port for connecting devices, as well as a headphone jack. Check out the pics below.

Sony says the Linux-based wireless device will have access to over 1,000 applications, including YouTube and other social apps – it also seems the company is intending to open app development up, too. Sony has also partnered with Navteq to access traffic updates. You can also have different user profiles for different members of the household.

Sony seems to believe that the device would be best suited for the bedroom, with a full alarm clock function including a snooze button on top. But what impresses us most is the price of the device – Sony will sell it in the US for $199, which is rather un-Sony.