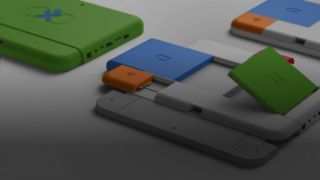 One Laptop Per Child (OLPC) could soon be joined by a Project Ara-esque hybrid device comprised of a number of brightly coloured modular components.

First reported by Inks, Bits & Pixels, the website for One Education OLPC's non-profit partner in Australia) contains images of the rear of a hybrid device that is made up of a CPU module, battery module, camera module and connectivity module.

A second image shows the same four modules from another angle in addition to what looks like an interchangeable display module.

Paul Cotton from One Education confirmed to the same publication that the images are of the XO-infinity device that it has been working on for around a year and an official announcement on the device is coming in the next week or so.

OLPC was launched back in 2005 and since then has launched four XO devices that range from the original laptop XO-1 to the to the XO-4 with tablets in between those two launches. By taking a modular approach to the XO-infinity it keeps up one of OLPC's main pledges to make its devices very easy to repair.