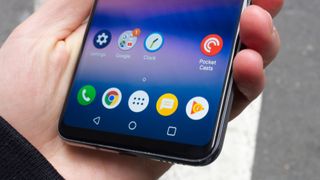 We're still waiting on a proper flagship smartphone launch from LG this year, but it looks like we now won't have long to wait for the arrival of the LG G7.

In a press release announcing a new partnership with K Pop band BTS, the South Korean firm confirmed the group would feature in marketing materials relating to "the company's upcoming flagship smartphone."

That chimes nicely with a report from ETNews in South Korea, that claims LG has confirmed the handset will launch in April, and go on sale in mid-May.

The press release from LG doesn't provide any further information on the handset, but it's widely rumored the handset in question will be the LG G7.

While LG G7 appears to be the most likely name for the the firm's new flagship, a fresh rumor suggests the handset may actually be called the LG G7 ThinQ.

While @evleaks has an exceptional record when it comes to smartphone leaks, we've already seen him trip up this year, originally saying that LG would retire its G series naming convention, only to reverse that after getting more information.

With that in mind, it's worth taking his latest tweet with a pinch of salt, and hopefully LG will see fit not to add the unnecessary characters to the end of the LG G7 name.

It's not the first time we've seen the ThinQ moniker used though. LG launched a new high-end handset at MWC 2018 back in February, but the V30S ThinQ was just a small incremental upgrade to 2017's V30, rather than a whole new flagship.