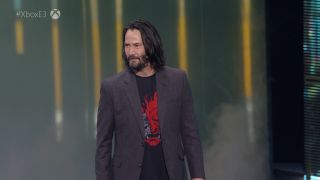 During Microsoft's E3 2019 keynote address, none other than "The Matrix" star Keanu Reeves took the stage to reveal his role in the upcoming Cyberpunk 2077 by The Witcher developer CD Projekt Red.

The surprising news came via an incredible extended trailer for the game, which included a release date – finally – of April 16, 2020. Naturally, the game will launch on Xbox consoles in addition to PlayStation consoles and PC.

However, it's unknown whether any new consoles will be available by that time for this game's release. Given its placement during Microsoft's keynote, we'd say an Xbox Project Scarlett release is almost certain now.

It's currently unknown what Reeves's role will be in the video game specifically, but his likeness has been achieved digitally to astounding detail. It appears that his unnamed character will lend a helping hand the the game's protagonist, known as 'Samurai'. It does not appear as if Reeves's character will be playable in the game.

This will be Reeves's first appearance in a video game since his likeness was achieved – to far less detail – in games based on "The Matrix" films way back for the PlayStation 2. Frankly, it's a setting that appears to be right at home for Reeves, sunglasses and all.

Cyberpunk 2077 is promised to be CD Projekt Red's most ambitious game to date, an open-world, action shooter role-playing game with heavy cinematic elements and a focus on player choices that have a deep impact on the story as it progresses. We'll be sure to dig for more information once we hit the E3 2019 show floor in the coming days.